Congress is back from August recess, with legislative days ticking away.

A bipartisan bill to protect sexual assault victims passed, as did a bill to allow families of 9/11 victims to sue sovereign states over potential involvement in those attacks. The energy conference committee met for the first time and a bipartisan water resources bill got ready to move next week. Zika funding failed for a third time but appears set to be rolled into a short-term spending bill that will stave off a government shutdown and send this Congress off into the election year sunset.

House Judiciary Chairman Bob Goodlatte and Ranking Member Zoe Lofgren teamed up to make the legislation a reality. Read more about how it all began from the Los Angeles Times.

The Senate passed a companion bill unanimously in May. Sen. Jeanne Shaheen [D, NH] introduced the legislation after meeting a young woman who had to return to the state where her assault occurred every six months to prevent her evidence from being destroyed.


What happens next?
Technical differences between the bills will be reconciled and then the legislation will head to President Obama's desk. He is expected to sign the measure into law.

Shortly before leaving for seven-week recess, the Senate voted 84-3 to convene a conference committee with House lawmakers over major energy legislation. This week, the House and Senate met for the first time to hear opening statements. This is the eighth conference convened this Congress, more than twice that of the previous Congress.

The nearly 800-page bill addresses energy generation, conservation, natural resources, transportation, security and trade and would be the first major overhaul of federal energy laws in a decade.


The conference committee consists of 24 Republicans and 16 Democrats. See if your lawmakers are serving as conferees.

That's great but what is a conference committee?
Glad you asked! A conference committee is a temporary, ad hoc panel composed of members from both House and Senate to resolve disagreements on particular legislation that has passed both chambers. The House and Senate must pass identical legislation before it can be presented to the President to become law.

On Friday, the House passed a bill allowing September 11 victims and relatives to sue Saudi Arabia or any other countries in federal court over possible roles in the 2001 attacks. The bill previously passed the Senate in May.

Vote could come as soon as next week

The Senate spent the week working on a $9.4 billion water projects bill that includes $200 million for updating water infrastructure in Flint, Michigan. Staffers have likened the importance of the bill to that of highway infrastructure bills.

On Thursday, Senate Majority Leader Mitch McConnell took the first procedural step and filed for cloture. Senators have until Monday at 3:30 pm to submit amendments.

What now?
Senate Majority Leader Mitch McConnell is looking to pass the bill next week. Initially, Senate Minority Leader Harry Reid threatened to block the bill's progress until the Senate addressed other priorities, namely a vote on Supreme Court nominee Merrick Garland, but speaking on the Senate floor on Wednesday, Senator Reid said Democrats will no longer block the bill. 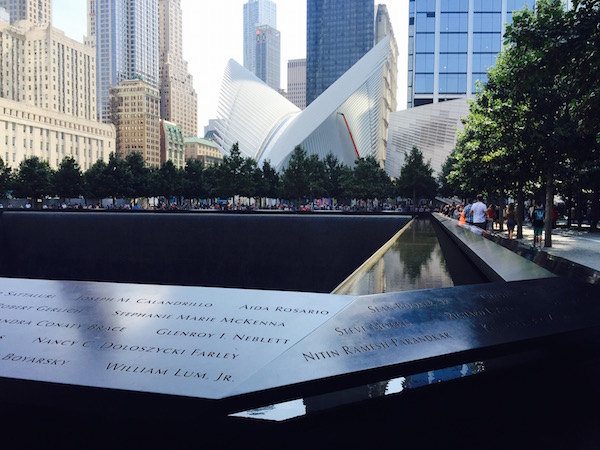 
And our very own Marci Harris, Co-founder and CEO, was in New York City this week, sharing her experience visiting the World Trade Center Memorial and reminding us all that the tragedy is anything but a distant memory.

Lawmakers look to CR to include Zika funding

The conference report would provide appropriations for military construction and the Department of Veterans Affair in Fiscal Year 2017 and supplemental appropriations to respond to the outbreak of the Zika virus. It would also include the text of H.R. 897, the Zika Vector Control Act, which would repeal Environmental Protection Act (EPA) requirements that require permitting under the Clean Water Act (CWA) for the application of EPA approved pesticides.

It now appears that Zika funding will be wrapped into efforts to pass several short-term spending bills.

Government funding runs out on Sept. 30


Lawmakers are hard at work brainstorming the best way to keep the government funded beyond Sept. 30. Speaker Ryan is considering smaller funding "mini-buses" instead of one large spending package. This strategy has been used in the past but more commonly an "omnibus" is used to lump all 12 spending bills together.

Senate Majority Leader Harry Reid said Democrats will accept a funding measure into December but no longer. This week Senate Majority Leader Mitch McConnell announced he's prepared to move a stopgap funding measure next week that would keep the government open through Dec. 9. This means the Senate might finish up late next week and leave the House to accept their spending resolution. Passage of a continuing resolution would fund the government at current spending levels.

Bills on the Move