The 114th Congress by the Numbers (so far)

The 114th Congress has passed a significant number of major policies into law. With six months left until it officially adjourns at the end of 2016, here's an overview of what this Congress has been up to since it convened in January 2015.

Major* Bills that Became Law in the 114th Congress (so far)

The 114th Congress has passed a significant number of major policies into law: from ending a Medicare physician payment system that required a temporary “doc fix” every year for seventeen years, to repeal of No Child Left Behind; repeal of the NSA bulk data surveillance program with reauthorization of the PATRIOT Act, the first long-term transportation bill in a decade, a new version of toxic chemicals bill, and an update to the Freedom of Information Act.

In the 114th, there have been many bipartisan moments, with procedural gymnastics that push parliamentary limits (usually designed to shield vulnerable members from tough votes). We saw this with passage of the controversial “Fast-Track” —Trade Promotion Authority (TPA) — authority for the President to negotiate trade agreements. The approval was packaged with customs reform and assistance for workers (Trade Adjustment Assistance or TAA) as it passed the Senate. The House then “split the question,” allowing for a separate vote on each piece and used a “self-executing rule” to deem the bill passed and send back to the Senate. (See: TPA amendment and House vote).

The policy motherlode came at the end of 2015 with departing Speaker John Boehner’s commitment to “clean the barn” before leaving his post. Boehner negotiated a 2-year bipartisan budget deal with Congressional leaders and the White House to raise sequestration limits for two years, raise the debt ceiling through March and 2017, and forestall a 20% cut to Social Security Disability Insurance. Notably, the deal put the kibosh on brinksmanship around the debt limit through the Presidential election cycle.

With a budget deal in place, incoming Speaker Paul Ryan’s first act was to shepherd a colossal Omnibus appropriations resolution through the legislative gamut (to spend the money that the budget deal authorized.) The 2,009-page bill contained new spending levels and requirements for all federal agencies, with few “policy riders” — unrelated provisions that are frequently inserted into spending bills to allow a controversial policy to “hitch a ride” with must-pass legislation. But, some of the bills that did ride in the Omni included reauthorizing the James Zadroga 9/11 Victim Compensation Fund, tightening restrictions on use of the visa waiver program for people who have traveled to certain countries, and the Cybersecurity Information Sharing Act (CISA), codifying an information-sharing framework between private industry and government.

A separate bill, still part of the Omnibus negotiations, made permanent many of the annual “tax extenders" that had been repeatedly authorized for one to two years, creating what many described as a lobbying bonanza. The 2015 Tax Extenders deal made many of these permanent (including the R&D credit), removing uncertainty and providing a more accurate baseline for federal budget projections.

The pace has continued in 2016, with several major bills passing just before the August recess, and several more teed up for action when Congress returns.

Major Bills that Became Law (so far) in the 114th Congress

Conference Committees and Reports in the 114th Congress (so far)

The "regular order" process for resolving differences between bills that pass the House and Senate in different forms is for House and Senate leaders to appoint "conferees" to represent each in a conference. The result is a "conference report," a combined bill that then gets a vote in both chambers.

While the conference process is well established, it fell out of practice for a few Congressional sessions, as members opted for more informal negotiating processes. However, holding legitimate conferences is still regarded as a sign of a functioning legislative process. The conference is seeing a comeback in the 114th Congress, with seven completed conference reports and two conference committees appointed just before Congress dismissed for recess. 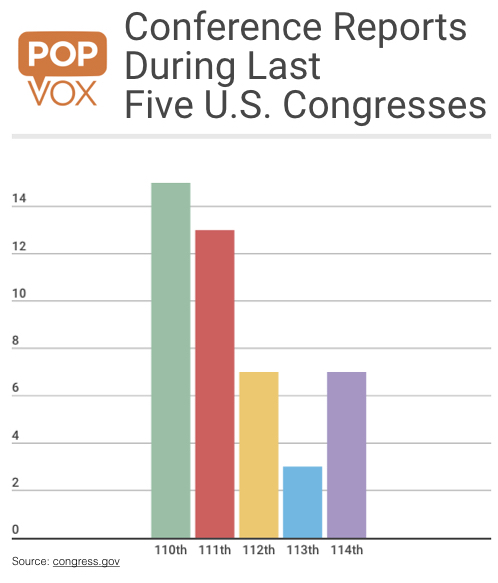 Those numbers only tell part of the story. The 110th and 111th Congresses engaged less in formal conferences than in informal “ping-ponging” and dealmaking. As a staffer for the newly appointed Energy conference committee, described to an industry publication:

In 2007, the last time Congress passed a bipartisan energy deal, there was an informal deal-making version of reconciliation. That means legislators have not conferenced on an energy bill since 2005… “A lot of the staff and some of the members have never been through the process. It will be really interesting to see how it unfolds because it won’t be familiar to a lot of the people in the room.”

But staffers (and Members) are getting used to it, with formal conferences now registered in the 114th on Education, Transportation, Trade, and a bill to combat the Opioid crisis — and Energy and the Defense bill ahead after the break.

Conference Committees in the 114th Congress

*We understand that "major" is in the eye of the beholder. We worked to narrow the list to make it easier to digest. If we missed something that you think should be here, please let us know!

Highlighting a bill does not imply POPVOX endorsement in any way. As always, our goal is to offer one more way to help you stay informed about the complex U.S. legislative system.

Editor Follow
« GAVEL DOWN: Closing out the Week in Congress
What’s going on with gun control legislation this year? »