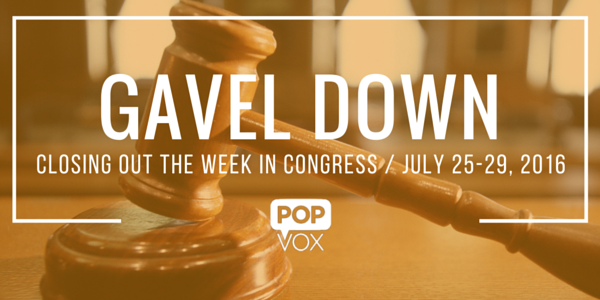 Congress is back home working…

And we're sending a summer version of Gavel Down —
full of how current events relate to Congressional happenings,
as well as updates on major legislation.

2. STUDENT DEBT
Many DNC speakers called for student debt reform. Last year, Congress passed a two-year extension of the Perkins loan program, which allows undergraduate students to obtain student loans on per need basis. Free college tuition was mentioned by several speakers, a policy promoted by Sen. Bernie Sanders [I, VT] who introduced the College for All Act.

3. TPP
Many in the DNC this week held signs referencing the TPP, the Trans-Pacific Partnership, a trade agreement between twelve Pacific Rim countries that was finalized earlier this year. Presidential advisors are encouraging Congress to approve the deal during the lame-duck session after the November election. Several Congressional leaders, including Senate Majority Leader Mitch McConnell and Minority Leader Harry Reid have said it is unlikely. What do you think?

4. GUN-RELATED LEGISLATION
Many speakers mentioned gun-related legislation. Following the Orlando shooting, there have been several bipartisan efforts to introduce, debate, and vote on gun-related legislation, such as increasing background checks, denying firearms to those on the terrorist watchlist, and closing the “gun show loophole.” To draw attention to the issue, Democratic Senators held the floor for 15 hours in a filibuster in mid-June, and House Democrats held a 25-hour sit-in on the chamber floor a week later. Catch up on what’s been happening.

What's happening with the energy bill?

Before adjourning for seven week recess, the House and Senate agreed to convene a conference committee on major energy legislation introduced last September. The last time the two chambers convened a formal conference to negotiate major energy bill was 2005.

Senate version covers five main areas: efficiency, infrastructure, supply, accountability, and conservation reauthorization. The Obama administration praised parts of the bill but has voiced concerns over how to implement some of the provisions. Senate passed bill in April by vote of 85-12. See how your Senators voted.

House version is narrower and received a veto threat from the White House. The "engrossed House amendment" includes several passed bills put up by House Natural Resources, House Energy and Commerce, House Transportation and Infrastructure, and House Agriculture. This means House replaced Senate version with its own version. House passed bill largely along party lines, by vote of 241-148. See how your Representative voted. 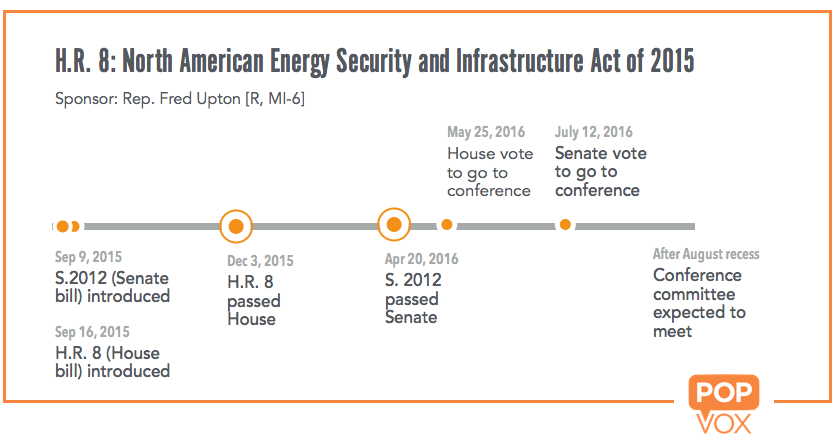 So now, Members head to conference to reconcile differences between their respective versions of legislation. Going to conference is one of the final steps of "regular order" in the legislative process — when House and Senate appoint conferees to meet and work out differences in different versions of similar bills that passed both chambers. According to U.S. Constitution, chambers must pass identical legislation for the bill to leave Congress and be signed by the President.