Gavel Down: Closing out the Year in Congress: 2015 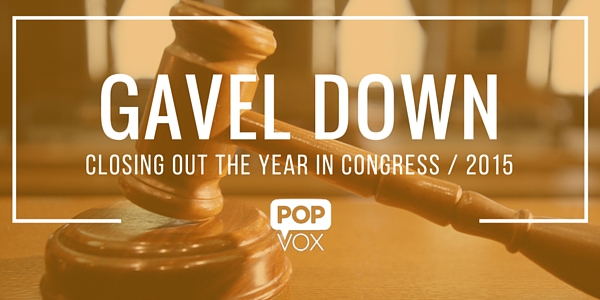 A staggering amount of policy made its way through the Capitol Hill maze in the first session of the 114th Congress — including big bills on transportation, education, tax, and spending.

The funny term you've seen floating around refers to the BIG end-of-year spending bill. Think of it like a bus (hence the name). Several smaller spending bills that did not make it out of the appropriations process on their own try to catch a ride on the 'bus. In the end, several bills will ride together in one big spending bill. This can make voting difficult if a Member supports some policy riders but not others.

The $1.1 trillion omnibus included bills with levels and conditions on spending across the federal government, including: the intelligence authorization bill, the Cybersecurity and Information Sharing (CISA) bill, reauthorization of health benefits for 9/11 first responders and repeal of the ban on crude oil exports. Learn more about what was included in the appropriations bill.

New Speaker On The Block

John Boehner shocked everyone when he retired abruptly this October — after serving as Speaker of the House since 2011. "Last night I started thinking about this," he said. "I said my prayers as I always do, and I decided, you know, today's the day I'm going to do this. As simple as that."

After much back and forth between top GOP Representatives, Rep. Paul Ryan [R, WI-1] was persuaded to throw his name in the running and was elected with 236 votes. Paul D. Ryan took the oath of office as the youngest Speaker of the House since 1869. This is only the fifth time in the last century the House has voted mid-term to elect a new Speaker.

Boehner made good on his pledge to "clean the barn" and led the House in passing a bipartisan budget deal. The Senate passed the budget deal at 3 am, delayed by objections from Presidential candidates Sen. Rand Paul [R, KY] and Sen. Ted Cruz [R, TX]. Sen. Pat Toomey [R, PA] also voiced concerns, saying the bill "fails to address our overspending problem." The Senate passed the deal 64-35, and it was quickly signed into law by President Obama.

You've heard the word reconciliation tossed around a lot this year — what does it mean? Reconciliation is an expedited process that offers some procedural advantages: it needs the support of a simple majority in the Senate, and cannot be filibustered. The reconciliation bill you've been hearing about is H.R. 3762 from Rep. Tom Price [R, GA-6]. This bill includes language to repeal key parts of the Affordable Care Act: the individual mandate, the employer mandate, and the Independent Payment Advisory Board (IPAB). It would also defund Planned Parenthood for one year.

Sens. Lamar Alexander [R, TN] and Patty Murray [D, WA] spearheaded the effort to overhaul the No Child Left Behind law. House and Senate lawmakers met in conference and agreed to a bipartisan, bicameral compromise, with a vote of 39-1 to endorse the deal. Sen. Rand Paul [R, KY] was the lone dissenter — not present but voting "no" by proxy — opposing any federal government role in public schools.

The Every Student Succeeds Act passed the House on 12/2/15 with a vote of 359-64 and passed the Senate on 12/9/15 with a vote of 85-12. President Obama signed the bill into law — marking a significant transfer of power and authority over public schools from the federal government to state and local governments. "Basically we're back to an era that encourages local and state innovation rather than Washington telling you what to do," said bill sponsor Sen. Lamar Alexander [R, TN].

House passed 2-year extension of Perkins loan program by voice vote. "Extending the Perkins Loan program ensures those in severe financial need will continue to have the certainty to help achieve their higher education goals," said the bill sponsor. The Senate agreed to the bill by unanimous consent. President Obama signed the bill into law on Dec. 18, 2015, making it Public Law No: 114-105.

Congress passed $622 billion "tax extenders" package on Dec. 18, 2015. "Tax extenders" are carve-outs in the tax code that give special treatment to certain activities. They are usually only authorized for one year and must be "extended" — giving way to a massive annual lobbying scramble for reauthorization from almost every corner of Washington.

This year's package many of the deductions and credits that are usually renewed each year and made some permanent, in addition to changes to some Treasury Department (and IRS) policies.

Learn more about the tax extenders package. It passed the House with a vote of 318-109, with only three Republicans voting against the bill: Reps. Justin Amash [R, MI-3], Chris Collins [R, NY-27], and Walter Jones [R, NC-3].

How did your Representative vote?

It passed the Senate with a vote of 65-33. How did your Senator vote?

After years of short term solutions, Congress passed the Fixing America's Surface Transportation (FAST) Act (H.R. 22) — the first long-term transportation bill to pass Congress in more than a decade. The bill combines elements from the DRIVE Act (S. 1647) and the STRR Act (H.R. 3763). From funding levels to policy provisions, the bill is far-reaching and spends $296 billion over five years. "I'm proud. I'm relieved. We are in dire need of this," said Sen. Barbara Boxer [D, CA].

The 1,300+ page bill includes several changes that affect anyone using the nation's roads, bridges, and transit systems, including:

Smiles and sighs of relief from Members in the @Transport room, following deal on five-year $305B highway bill. pic.twitter.com/L3A0bFLodd

Authorization for Use of Military Force (AUMF)

From beginning to end, 2015 has been marked by the term AUMF. You've heard it tossed around in presidential debates and used as a call-to-action in President Obama's Oval Office Address.

What is an AUMF and why is it needed? The President must notify Congress within 48 hours of ordering U.S. armed forces for a military operation overseas. These forces cannot operate in a deployed status for more than 60 days without a congressional declaration of war or an authorized use of military force (AUMF).

As the second half of the 114th Congress begins, several versions of authorization exist but none have been approved. The New York Times published an interactive tool to compare the various authorization plans. For example, the Graham bill authorizes "all necessary and appropriate force," with no restrictions on ground troops, whereas the president's draft expressly does not authorize use of forces in "enduring offensive ground combat operations." The drafts by the president, Senate Foreign Relations Committee, and Kaine-Flake all limit authorization to three years — the Graham bill has no time limits.

Despite recent calls from the President and lawmakers for a war authorization, both Speaker Paul Ryan and Senate Majority Leader Mitch McConnell said Congress is unlikely to pass a new authorization to fight the Islamic State — fearing a new authorization would constrain the next commander in chief.

With overwhelming bipartisan support, leaders of both parties came together to produce a bill that would repeal the Sustainable Growth Rate (SGR) — a method used to control spending by Medicare on physician services. The long-awaited "doc fix" prevented a 21 percent cut in Medicare's physician fees. "This is what we can accomplish when we focus on finding common ground," said then Speaker John Boehner.

When you read about the mental health bill, it's most likely referencing the Murphy bill (H.R. 2646). This bill includes provisions to increase the number of psychiatric hospital beds available (by lifting restrictions on Medicaid paying for certain care), to change health privacy law HIPAA (to allow caregivers and family members more information about a mentally ill person's care), and award a 2 percent increase in federal grants to states with assisted outpatient treatment (AOT) laws (where judges can mandate patients with serious mental illness seek treatment).

The Energy and Commerce health subcommittee advanced the bill last month, but consideration by the full committee has been put off until lawmakers work out new language. "I think that Dr. Murphy realizes that we're really not trying to kill the bill, we just have deep feelings that we've got to do something a little different to make it work right legally," said Rep. Morgan Griffith [R, VA-9].

The Senate quietly passed Comprehensive Justice and Mental Health Act (S. 993 / H.R. 1854). It received very little attention and reportedly, some some staffers weren't aware of the bill's passage. The lack of messaging surrounding the bill surprised many. The bill focuses on the criminal justice system — namely providing support for state and local officials in identifying people with mental illnesses within the criminal justice system.

In a historical first, Pope Francis became the first pontiff to address a joint meeting of Congress. He urged Congress to "move forward together, as one, in a renewed spirit of fraternity and solidarity" — calling for a new era of bipartisanship. Speaker Boehner referenced "the awesome sight of Pope Francis addressing the greatest legislative body in the world" when announcing his decision to retire from Congress.

2015 was also the year of the “deal”, with several significant announcements from the President and strong responses from Congress:

Editor Follow
« Top Bills of 2015
WEEKLY UPDATE: The Week Ahead in Congress »