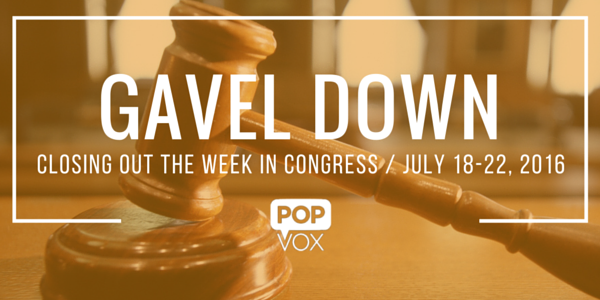 We bring you a summer version of Gavel Down — full of how current events relate to Congressional happenings, as well as updates on major bills.


1. SANCTUARY CITIES
Many RNC speakers mentioned “sanctuary cities” — cities that bar local law enforcement from complying with federal immigration authorities, usually by not allowing police or municipal employees to inquire about an individual's immigration status. There have been several attempts this Congress to call up legislation related to sanctuary cities. Three bills have failed to pass procedural hurdles in the Senate. Learn more.

2. TRADE AGREEMENTS
You couldn't watch the RNC and not hear trade agreements mentioned. Trade agreements are broad tax, tariff, or trade pacts made between countries, often including investment guarantee. The most talked about trade agreement this Congress is the Trans-Pacific Partnership, finalized proposal between twelve Pacific Rim countries. Presidential advisors expect Congress to approve the deal during the lame-duck session, following the November election, but Senate Majority Leader Mitch McConnell said this is unlikely. What do you think?

4. GLASS-STEAGALL
One similarity between the RNC and DNC platforms is a call for to “reinstate Glass-Steagall,” referring to the post-Depression law that separated commercial and consumer banking activity. In 1999, Bill Clinton signed the Gramm-Leach-Bliley Act, which rolled back many of the original provisions, allowing commercial banks, investment banks and non-bank financial entities to consolidate. Some policymakers on both sides of the aisle have argued that 1999 changes created greater consolidation of risk in the banking sector, and led to the 2008 financial crisis. Several pending bills would reinstate provisions of the Glass-Steagall Act: The 21st Century Glass-Steagall Act (S. 1709) and (H.R. 3054) and the draft Financial CHOICE Act from Rep. Jeb Hensarling [R, TX-5].  Read more on proposed financial reforms.

5. CONSCIENCE PROTECTION"Conscience protection" was specifically mentioned in this year's RNC platform. These policies usually refer to provisions allowing health care providers to refuse to provide certain treatments or assistance that violate the provider's religious beliefs. Last week Congress passed a bill that would shield health care providers that decline to be involved in abortions as a matter of conscience. See how your representative voted.

What's happening with the defense bill?

Congress is "going to conference" on the on annual defense authorization bill:

That means House Democrats and Republicans will appoint a few members as "conferee;" Senate Democrats and Republicans will do the same. The conferees will meet to hammer out differences between what passed the House and what passed the Senate, to reach one combined version that will go back to both chambers for a vote. According to U.S. Constitution, chambers must pass identical legislation for the bill to become law.

Conferees will begin their work on a combined bill after they return from recess in September. President Obama has threatened to veto both the House and Senate versions. Read more about both versions.

Editor Follow
« Bill Mentions: Congress to Conference on Defense Bill
The 114th Congress by the Numbers (so far) »