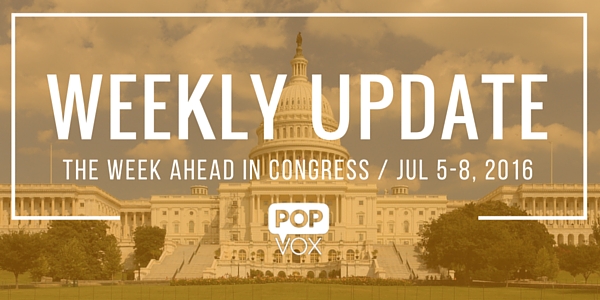 Bills up for a vote in Congress this week

Congress returns from July 4 to begin its annual sprint to August recess.

The House will take up a counterterrorism bill that includes restrictions on gun purchases for terror suspects, as well as bills on mental health, Medicare payment policies for medical equipment, and fixes to new crowdfunding rules. It may also vote on the FAA and Defense authorization bills if they are ready, and the conference report for the combined House/Senate opioid bill.

The Senate will vote on tightening immigration enforcement for those convicted of crimes and penalizing "sanctuary cities" before turning to a bill to provide a federal standard for state GMO labeling requirements.

Last week, House GOP leaders announced a bill that includes the ability for law enforcement to seek to block firearms purchases if they suspect the person poses a terrorism risk.

When the Attorney General is notified of a request to transfer a firearm or an explosive to a person who is being, or has been investigated during the previous 5 years, as a known or suspected terrorist, the Attorney General shall notify relevant Federal, state, or local law enforcement agencies, or intelligence agencies, concerning the identity of the individual.

The bill was introduced in the wake of House Democrats' sit-in calling for action on gun control after the tragic Orlando shooting. It is supported by the National Rifle Association (according to news reports). Several Democrats have expressed opposition and intent to offer amendments.

Members of Congress have also introduced bills to address access to mental health services in response to several tragic mass shootings. This week the House will vote on a bill from Rep. Tim Murphy [R, PA-18]:

"Sanctuary cities" refer to cities that have policies designed to shelter immigrants who are in the United States illegally. Most of these cities do not allow municipal funds or resources to be used to enforce federal immigration laws, usually by not allowing police or municipal employees to inquire about an individual's immigration status. Read more about "Sanctuary Cities" from POPVOX.

The issue became a flashpoint after the death of Kathryn Steinle, who was fatally shot on July 1 in San Francisco by a Mexican national with a criminal record who had been deported several times. This week, the Senate will vote on two related bills:

*A "legislative vehicle" is a bill that is amended with another bill. This one was particularly confusing: S. 764 was originally the National Sea Grant College Program Amendments Act (passed Senate 7/28/2015). The House added the Defund Planned Parenthood Act on 9/18/2015 and sent it back to the Senate.The Senate is now considering the bill with the GMO language, completely stripping out the other provisions. Confused? So were the senators.

Possible Votes if Legislation is Ready: