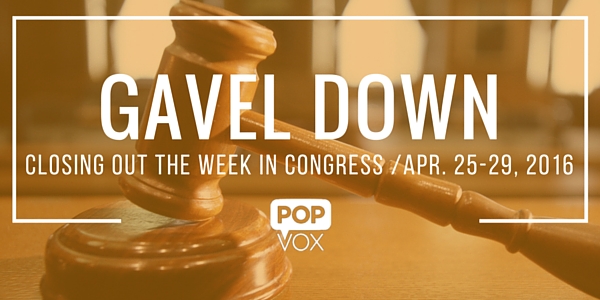 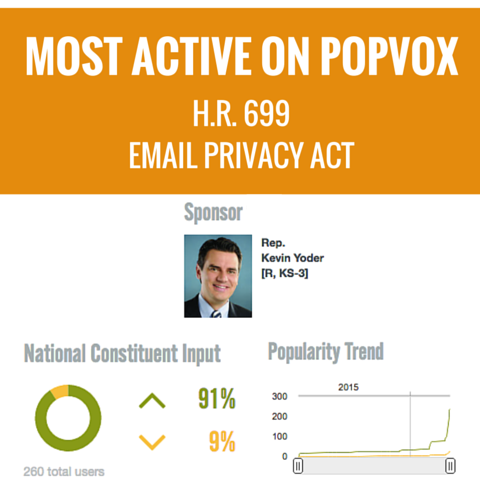 Most active bill on POPVOX this week:

The bill allows companies to sue entities for trade secret theft in federal court. Currently, only the Justice Department can sue on allegations of trade secrets theft.

So what is a trade secret, anyway?

Information that someone has taken reasonable measures to protect which derives independent economic value from not being generally know.

Trade secrets are a form of intellectual property. However, other common forms such as patents, copyrights, and trademarks all have federal civil causes of actions as well as federal registration. Currently, trade secrets are protected civilly at the state level only. (See: Jones Day)

Obama administration strongly supported the measure, highlighting the need for effective protection of trade secrets and commending lawmakers on bipartisan effort to formulate the bill. (See: Statement of Administration Policy)

President Obama is expected to sign the bill into law, with some describing the new protections as  "the most significant expansion of federal law in intellectual property in 70 years."

During debate, House Judiciary Chairman Bob Goodlatte said that when the law was written in 1986, "Tweets were the sounds made by birds in the trees and clouds were found only in the skies."

Bill sponsor Rep. Jared Polis [D, CO-2] echoed these sentiments, "When ECPA was written, the internet as we understand it did not exist."

House voted 234-183 to disapprove a rule from the Department of Labor requiring financial advisors to disclose any incentive agreements or conflicts of interest they have with financial products they recommend, known as the fiduciary rule.

H.J.RES. 88 DISAPPROVING THE RULE SUBMITTED BY THE DEPARTMENT OF LABOR RELATING TO THE DEFINITION OF THE TERM "FIDUCIARY"
Sponsor: Rep. David Roe [R, TN-1]

The rule requires brokers to act in the “best interest” of their clients when handling retirement accounts. This rule is meant to protect workers from conflicting investment advice and improve disclosures. Opponents of the rule say that it would discourage financial firms from serving low-income clients.

Disapproval resolutions are “rarely used and almost always veto-ed,” but have become more common in the current Congress, with resolutions to disapprove environmental regulations passing both the House and Senate (and encountering the Obama veto pen.)

A similar resolution of disapproval has been introduced in the Senate.

S.J.RES. 33 JOINT RESOLUTION PROVIDING FOR CONGRESSIONAL DISAPPROVAL UNDER CHAPTER 8 OF TITLE 5, UNITED STATES CODE, OF THE RULE SUBMITTED BY THE DEPARTMENT OF LABOR RELATING TO THE DEFINITION OF THE TERM "FIDUCIARY" AND THE CONFLICT OF INTEREST RULES WITH RESPECT TO RETIREMENT INVESTMENT ADVICE
Sponsor: Sen. Johnny Isakson [R, GA]


Appropriations process stalled in the Senate with two failed cloture votes on $37.5B energy and water spending bill. Disagreement arose over proposed amendment to prevent the government from using federal funds to purchase heavy water from Iran's nuclear program.

Senate failed to invoke cloture on the bill in two votes: first 50-46 on Wednesday and then 52-43 on Thursday — falling short of the 60 votes needed to end debate.  Procedural refresher: Senate cannot vote on the bill until cloture is invoked or until lawmakers agree on how to handle the heavy water amendment offered by Sen. Tom Cotton [R, AR].

Lawmakers are divided over whether the amendment is "germane to the bill," meaning it is relevant to the appropriating of fiscal year 2017 funds.

White House spokesman Josh Earnest said he was "gratified" with the Senate vote. "We've made clear our commitment to a principle that ideologically motivated policy riders are not appropriate for appropriations bills." 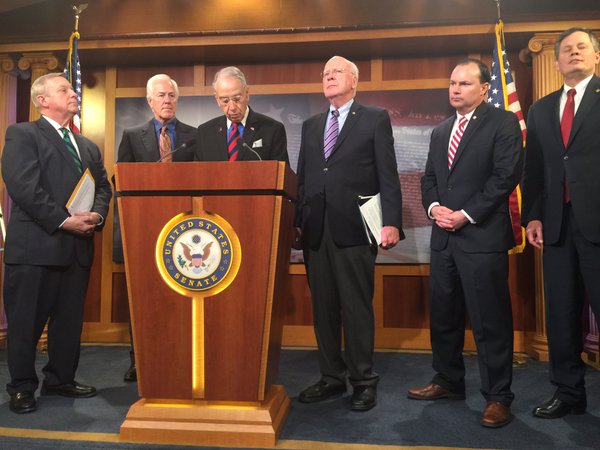 Bipartisan group of Senators announced new progress on "criminal justice overhaul package." Senate Judiciary approved the bill last year by a vote of 15-5, but disagreements among lawmakers prevented the bill from seeing the Senate floor.

Revisions also ensure inmates convicted under the Armed Career Criminal Act do not qualify for reduced sentences, as well as increase mandatory sentences for offenses involving the opioid fentanyl.

On Thursday, the House Armed Services Committee (HASC) marked up and passed the FY2017 National Defense Authorization Act, the "NDAA" (H.R. 4909). The NDAA authorizes a total of $610.5 billion in mandatory and discretionary spending for national defense, including $58.8 billion for overseas operations.  See: Bill Summary

Editor Follow
« WEEKLY UPDATE: The Week Ahead in Congress
GAVEL DOWN: Closing out the Week in Congress »