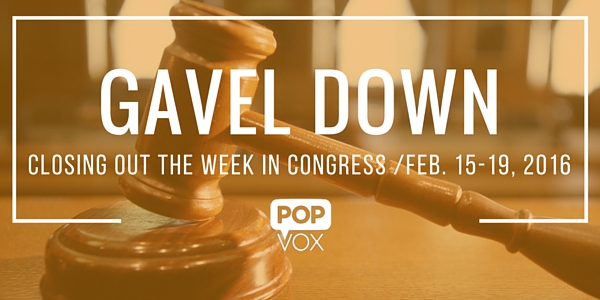 Both House and Senate were in recess this week for President's Day. Apple contested a court order involving unlocking the phone of San Bernardino shooter. Minneapolis Federal Reserve President Neel Kashkari said many banks are still "too big to fail" and proposed breaking banks up. FCC voted 3-2 to let consumers swap their cable TV boxes for cheaper devices and apps. Public discussion about the process or potential for Justice Scalia's success continued.


Most active bill on POPVOX this week: 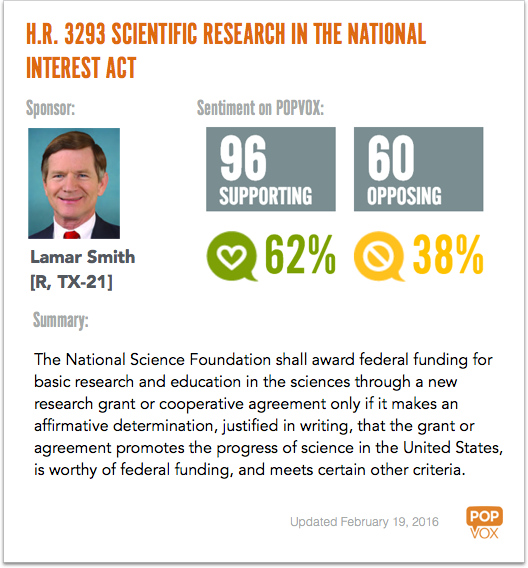 On February 17, a federal judge ordered Apple to comply with an FBI request for technical assistance to access the iPhone of the San Bernardino shooters. Here are some details in the case:

Trail of Bits blog explains in a breakdown of the technical issues, “the FBI wants Apple to create a special version of iOS that only works on the one iPhone they have recovered. This customized version of iOS will ignore passcode entry delays, will not erase the device after any number of incorrect attempts, and will allow the FBI to hook up an external device to facilitate guessing the passcode.”

Apple argues that the FBI’s request would compel it to write new code that will compromise the security of its product in the future. U.S. Magistrate Sheri Pym ruled that Apple must comply with the FBI’s request.

Apple CEO, Tim Cook, in a letter to customers, explained that Apple will challenge the ruling:

We can find no precedent for an American company being forced to expose its customers to a greater risk of attack. For years, cryptologists and national security experts have been warning against weakening encryption. Doing so would hurt only the well-meaning and law-abiding citizens who rely on companies like Apple to protect their data.

The FBI cites the 227-year old “All Writs” statute from the 1879 Judiciary Act to make its case. That provisions states:

(a) The Supreme Court and all courts established by Act of Congress may issue all writs necessary or appropriate in aid of their respective jurisdictions and agreeable to the usages and principles of law.
(b) An alternative writ or rule nisi may be issued by a justice or judge of a court which has jurisdiction.

Ars Technica explains: “While the All Writs Act is not used every day, the act has been successfully invoked by the government to compel telephone companies to install wiretaps, for phone companies to hand over call records, and to obtain CCTV footage, handwriting exemplars, and DNA samples. It has even been cited to force a defendant to cough up his computer password.”

The Justice Department said Apple's refusal is a "marketing strategy" rather than based on legal rationale. Today, DOJ filed a motion asking a federal judge to immediately force Apple to assist in unlocking the phone.

More on the topic from Engadget, Wired, The New York Times, The Verge

The Apple FBI debate upped the ante on encryption legislation. Senate Intelligence Chairman Richard Burr [R, NC] is weighing how best to address encryption legislation but has decided against proposal to criminalize a company's refusal to aid decryption efforts as part of a governmental investigation. Sen. Dianne Feinstein [D, CA] will introduce a bill that would give the government access to encrypted communications. Rep. Michael McCaul [R, TX-10] and Sen. Mark Warner [D, VA] are working on a bill that would create a commission to find a solution without creating a "backdoor." House Judiciary Committee announced it will hold encryption hearing on March 1.

Kashkari, who led the Troubled Assets Relief Program (TARP) in the wake of the 2007-2009 financial meltdown and recently ran for governor of California, suggested giving “serious consideration” to policies such as (1) breaking up large banks into "smaller, less connected, less important entities,” (2) forcing large banks to hold so much capital that they literally cannot fail and instead act more like public utilities, (3) “Taxing leverage throughout the financial system to reduce systemic risks wherever they lie.”

He listed three lessons learned from the financial crisis:

The speech at Brookings kicks off a series of policy symposiums hosted by the Minneapolis Fed to see input from experts, academics, regulators and financial professionals. Read full remarks.

The speech took some by surprise — Politico said: “Kashkari drops a bomb,” Reuters called the plan “radical”, Business Insider proclaimed it “quite an entrance.

Several proposals are pending in Congress that would impact Dodd-Frank, including proposals to repeal completely, strengthen Dodd-Frank, and implement a new Glass-Stegall Act (separating investment and retail banks).

Your home cable box is now the subject of hot debate in Washington. On Thursday, the FCC approved a “notice of proposed rulemaking” to “unlock” the set top box:


U.S. consumers spend $20 billion a year to lease these devices. Since 1994, according to a recent analysis, the cost of cable set-top boxes has risen 185 percent while the cost of computers, televisions and mobile phones has dropped by 90 percent. Congress recognized the importance of a competitive marketplace and directed the Commission to adopt rules that will ensure consumers will be able to use the device they prefer for accessing programming they’ve paid for.”

Thousands stood in line at the Supreme Court building on Friday, where Justice Antonin Scalia lay in state. Mourners left mementos and reminders of the memorable Scalia phrases that colored his decisions and dissents, including broccoli, applesauce, and fortune cookies. A private ceremony for friends and colleagues was held at the Court in the morning, and the funeral will be 11 AM Saturday at the Basilica of the National Shrine of the Immaculate Conception.

Bloomberg News spoke to noted Constitutional Law professor and dean of the University of California Irvine School of Law, Erwin Chemerinsky (who literally wrote the book[s]) about the issues involved:

[Chemerinsky] said the framers expected the Senate to act. If senators could simply ignore a president’s nomination, they would have the power to undermine the judiciary.

"The Constitution has to be interpreted to make sense, and it doesn’t make sense unless you say the president nominates and the Senate has to give advice and consent," he said.

Chemerinsky said that, even if the Senate is obligated to take up a nomination, the only way to enforce that requirement would be public pressure.

Take an anonymous survey and
tell us about your state and what you want to see from POPVOX/States!

"Why Apple is Right to Challenge an Order to Help the F.B.I" by The New York Times Editorial Board