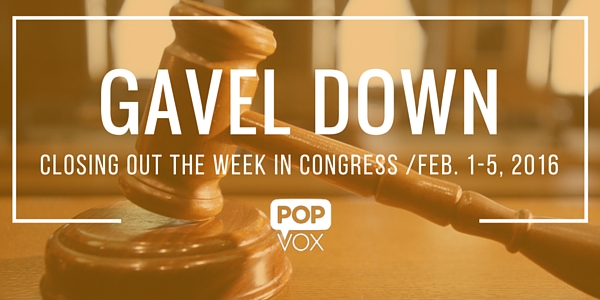 The Senate failed to advance a bipartisan energy bill due to controversy over funding to aid Flint, Michigan. The House took another vote to end Obamacare, failing to override the President's veto — on Groundhog Day. The House passed several bills related to startup investment and ending "Operation Choke Point." Conservatives in Congress preemptively opposed the President's budget, set for release next Tuesday. And the House Oversight Committee had quite a week!

Most Active Bill on POPVOX this week:
S. 659 BIPARTISAN SPORTSMEN'S ACT OF 2015 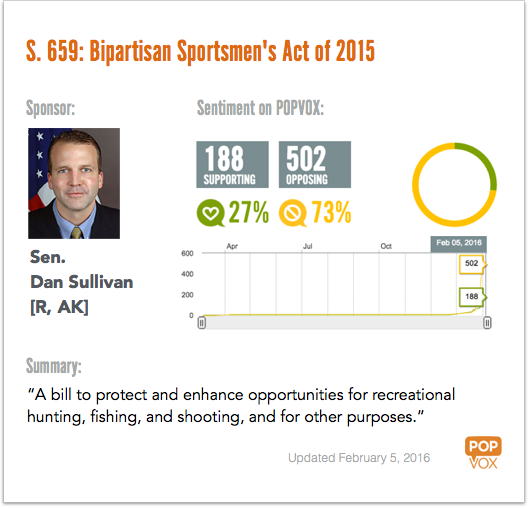 The Senate failed to invoke cloture on energy bill, brought down by disagreements over funding for Flint water crisis. Senate Majority Leader Mitch McConnell said Sens. Murkowski and Cantwell will work this weekend on a new plan and "hopefully we'll be able to salvage it."

How did your senator vote? 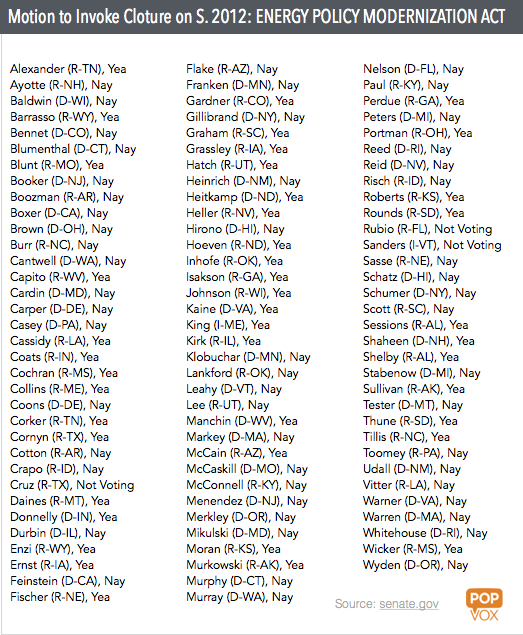 
The House passed a bill to expand the definition of an "Accredited Investor" eligible to participate in certain unregistered securities to include those with as securities license or relevant professional expertise. The Fair Investment Opportunities for Professional Experts Act (H.R. 2187) now goes to the Senate. The House also passed legislation aimed at making it easier for companies to compensate employees with equity.

The House passed a bill to prohibit the practice of federal agencies "choking" the accounts of businesses deemed "high risk." The practice reportedly affects some online gambling, online lotteries or online payday lenders. Introduced in response to the Justice Department's "Operation Choke Point, " H.R. 766 "prohibits a federal banking agency from formally or informally suggesting, requesting, or ordering a depository institution to terminate either a specific customer account, or group of customer accounts, or otherwise restrict or discourage it from entering into or maintaining a banking relationship with a specific customer or group of customers, unless: (1) the agency has a material reason to do so, and (2) the reason is not based solely on reputation risk." The bill passed 265-159 and now goes to the Senate.

How did your representative vote?

On Tuesday, President Obama will submit his Budget to Congress. The President's Budget is an outline, a proposal, a "this is how I would do it if I didn't have to go through Congress," version. It is not a bill.

In December 2015, Congress passed an Omnibus spending bill that covers spending through fiscal year 2016. The budget submitted by the President would cover FY 2017, which begins October 1, 2016.

While some Members of Congress may introduce parts of the budget as bills or some parts of the budget may already exist as bills, the presidential budget has decreasing relevance, especially when proposed by a president whose party does not control Congress, and all the more when it is the final year of that president’s term, as many have noted.

In fact, this year, the House and Senate Budget committees announced that they would not hold the traditional hearings on the President’s proposal. Talks have started on Capitol Hill for the Congressional budget process:

[Speaker] Ryan wants the House to pass a budget earlier than usual this year so that lawmakers can get to work on appropriations. Party leaders in both chambers aim to pass all 12 appropriations bills this year for the first time since the 1990s.

In preparation for the Budget battles ahead, the Speaker hosted a "budget and beer" get-together with members of the House Freedom Caucus. The meeting ran past 10 pm, and Freedom Caucus Members urged the Speaker to put forth a budget that reverts to the spending figure set under sequestration.

The President’s budget will call for a “21st Century Clean Transportation System” funded by a one-time business tax reform and sustained by an ongoing $10 per barrel oil tax paid by oil companies.

The announcement was greeted with a cold reception by many on Capitol Hill. Speaker Paul D. Ryan called the proposal “dead on arrival.”

Other Expected Proposals in the President's Budget

As you may have noticed, gas is really cheap these days. “The world is drowning in oil.” (The Economist). The steep price drop is attributed by many to: increased production from oil-producing countries (the U.S. doubled production in the past few years), OPEC resistance to cutting production to stabilize prices (see fascinating interactive graphic), more energy-efficient vehicles decreasing demand, economic slowdown in China, and new oil entering the market from Iran as sanctions are lifted. Meanwhile, oil companies are announcing record losses (See: Shell, Exxon, Chevron, BP).

The price of oil is also shrinking state transportation funding coffers, which finance road repairs and highways (See: States with the highest and lowest gas taxes). One little-noticed provision in the recent Omnibus bill provides for some belt-loosening by freeing funding from previous transportation earmarks, expected to total approximately $2 billion. The Federal Highway Administration will soon release the list of earmark funding available, which must be spent on projects within 50 miles of the original allocation. States agencies and road builders are eagerly awaiting the list.


The House Committee on Oversight and Government Reform had quite a week — dominating the news cycle with three intense hearings.

Hearing #1: U.S. Department of Education: Investigation of the CIO
The Committee began the week examining an ethics dispute within the Department of Education. Lawmakers accused Danny Harris, the agency's chief information officer, of failing to disclose outside income (failing to pay taxes on that income), awarding a government contract to a friend's company, and involving subordinate employees in side businesses. "I view my behavior as unacceptable," said Harris. "I make no excuses." After four hours of questioning, Harris collapsed, was taken to a hospital, and has since recovered.

The Committee expressed concerns over the agency's ability to protect the data of 139 million Americans in a hearing last November. House Oversight and Government Reform Chairman Jason Chaffetz [R, UT] warned that a cyber attack on DOE would affect almost half of the country and would eclipse the massive cyber attack the Office of Personnel Management experienced last year.

Hearing #2: Examining Federal Administration of the Safe Drinking Water Act in Flint, Michigan
Next, the Committee examined the Flint water crisis, concluding the crisis was "a failure at every level of government." Three officials were issued subpoenas for not attending, including Flint Emergency Manager Darnell Earley. The Committee directed U.S. marshals to "hunt down" Earley to serve him his subpoena.

Joel Beauvais, the acting director of water quality for the Environmental Protection Agency was asked why the agency did not act immediately upon learning the water might contain lead. He said he didn't know. "You cannot come to a hearing before Congress and be in charge of water quality for the EPA and not know the answer to that question," said House Oversight and Government Reform Chairman Jason Chaffetz [R, UT].

Congressional panels will examine the drinking water contamination over the next few months. House Democrats invited Gov. Rick Snyder to testify before the Steering & Policy Committee next week, while the House Energy and Commerce Committee announced it will hold a March hearing on the Flint water crisis.

Hearing #3: Developments in the Prescription Drug Market
Lastly, the Committee shifted attention to the prescription drug market. Prescription drug prices continue to increase, and Americans pay more for drugs than people in other countries. The Committee subpoenaed Martin Shkreli, the former CEO of Turing Pharmaceuticals who increased the price of Daraprim from $13.50 per pill to $750 per pill overnight. Shkreli invoked his Fifth Amendment right and refused to answer lawmakers' questions…only to invite lawmakers to a post show later on Twitter. His smirks went viral — as did this vine.

The Food and Drug Administration's lengthy review process for generic drug applications also came under fire. Currently there are over 3,500 generic drug applications awaiting FDA approval. Committee members said this massive backlog gives pharmaceutical companies pricing control. Rep. Blake Farenthold [R, TX-27] said "You're getting down to 10 and 15 months, but you've basically created a 10 and 15 month monopoly for anybody who's a single source of a generic drug who do that kind of price increase and name their price for that drug."

The Senate Committee on Health, Education, Labor, and Pensions examined the Generic Drug User Fee Amendments in a hearing last week. The Committee concluded that the process to approve generic drugs is still too slow, despite receiving an extra $1 billion from the generic drug user fee program.

Don't Panic: Making Progress on the "Going Dark" Debate by The Berkman Center for Internet & Society at Harvard University

What Does the Gig Economy Mean for Workers? from the Congressional Research Service

Why is New Hampshire the first primary in the nation? by Elaine Kamarck, Brookings