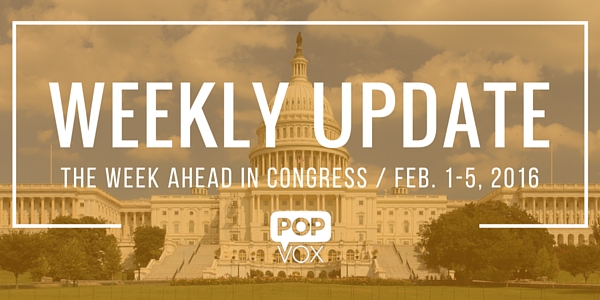 While the political world will be focused on the Iowa caucuses, Congress is back with both chambers in session. The House will consider changes to reporting and investing rules for small businesses and startups and reform to housing assistance programs. The House will also attempt to override the President’s veto of the Obamacare repeal that passed last year, and will re-vote on a bill to limit the President’s ability to lift Iranian sanctions. The Senate continues work on a bipartisan Energy bill.

The House will vote to override the President's veto of the Reconciliation bill:

H.R. 3762 would repeal key parts of the Affordable Care Act: the individual mandate, the employer mandate, and the Independent Payment Advisory Board (IPAB), and would defund Planned Parenthood for one year.

The House attempted to limit the President's ability to raise sanctions on Iran with a vote on H.R. 3662 on However, House Members did not make it to the House Floor within the 15 minutes allotted for the vote, and Speaker Ryan closed the vote with 137 votes outstanding (57 Republicans, 80 Democrats). The vote was "vacated" and will be held again this week:

This bill prohibits the President from removing sanctions on foreign financial institutions until the President makes two certifications to Congress: (1) that the institution has not knowingly facilitated transactions or provided significant financial services for or on behalf of Iran’s Revolutionary Guard Corps or any of its agents, a foreign terrorist organization, or a person whose property or property interests are blocked pursuant to the IEEPA in connection with Iran’s proliferation of weapons of mass destruction. (2) that the institution no longer knowingly engages in illicit or deceptive financial transactions or other activities.

The House will vote on a package of financial services bills regarding investment, access to capital, and reporting requirements for startups and small businesses.

The bill that will be considered by the House this week actually contains several related bills related to SEC requirements for small businesses and startups.  (Read full text from the House Rules Committee):

Included bills:
H.R. 1675: Lifts the threshold of securities that must be reported to investors for private companies awarding stock as part of an employee’s compensation from $5 million to $10 million in one year.

H.R. 686:  "The M&A Broker Bill" — would allow private Mergers and Acquisitions brokers to be exempt from registration with the SEC.

H.R. 2354 – Requires the SEC to "review each significant regulation it has issued; determine by vote whether it is ineffective, excessively burdensome, unnecessary, or inconsistent with its mandate; solicit public comment as to whether the regulation should be amended or repealed; and subsequently amend or repeal accordingly."

H.R. 2356 – creates a safe harbor for certain publications or distributions of research reports by brokers or dealers distributing securities.

Changes the definition of an “accredited investor” to include:
(1) persons whose individual net worth, including their spouse’s, exceeds $1,000,000, excluding the value of their primary residence; (2) persons with an individual income greater than $200,000, or $300,000 for joint income; (3) persons with a current securities-related license; and (4) persons whom the Securities and Exchange Commission (SEC) determines have demonstrable education or job experience to qualify as having professional subject-matter knowledge related to a particular investment.

Requires federal banking agencies to treat certain municipal securities that are liquid, readily marketable, and investment grade as of the calculation date as high-quality level 2A assets.

Requires the SEC review the findings of the annual government-business forum and issue a public statement promptly assessing it and disclosing the action, if any, the SEC intends to take with respect to it.

Introduced in response to Operation "Choke Point," the bill "prohibits a federal banking agency from formally or informally suggesting, requesting, or ordering a depository institution to terminate either a specific customer account, or group of customer accounts, or otherwise restrict or discourage it from entering into or maintaining a banking relationship with a specific customer or group of customers, unless: (1) the agency has a material reason to do so, and (2) the reason is not based solely on reputation risk.

H.R. 3700 would amend the United States Housing Act of 1937 to change certain aspects of the Department of Housing and Urban Development's (HUD’s) rental assistance programs. The bill would alter calculations of tenant income and rent; make households that exceed new income and asset limits ineligible for assistance; change requirements for adjusting payment standards; and expand eligibility for the Family Unification Program. The bill also would make changes to Federal Housing Administration (FHA) requirements that affect whether buyers of certain condominiums would be eligible to receive mortgage insurance from the agency.

authorizes appropriations for the Coast Guard for FY2016-FY2017 as well as an end-of-year strength for active duty personnel of 43,000 for each of them and specified average military training student loads.

This bill states that it is U.S. policy to partner with the governments of sub-Saharan African countries, international financial institutions, and African regional economic communities, cooperatives, and private sectors to:

promote first-time access to power services for at least 50 million people in sub-Saharan Africa by 2020; encourage the installation of at least 20,000 additional megawatts of electrical power in sub-Saharan Africa by 2020; promote reliable and affordable power in urban, rural, and under served areas; encourage necessary reforms to support electricity access projects and market-based power generation and distribution; promote policies to displace kerosene lighting with other technologies; promote an energy development strategy for sub-Saharan Africa that includes the use of oil, natural gas, coal, hydroelectric, wind, solar, and geothermal power; and promote the use of private financing and seek ways to remove barriers to private financing and assistance for projects, including through charitable organizations.

Establishes an "Angel Watch Center" within the Child Exploitation Investigations Unit of U.S. Immigration and Customs Enforcement to receive information on travel by child-sex offenders; establish a system to maintain and archive all relevant information… and to engage in ongoing negotiations with nongovernmental organizations, governments, and internet companies "to facilitate the implementation of an international sex offender travel notification system in the United States and in other countries."

Would require the Department of State and the U.S. Agency for International Development each to submit a report to the Congress on how they would define recruitment and placement fees charged by contractors or their agents. The agencies also would be required to modify their contracting policies and practices to prevent trafficking in persons.

The Senate will continue its work on the bipartisan “Energy Policy Modernization Act” (S. 2012).

Last week, the Senate adopted three amendments to the energy bill. (130+ amendments have been proposed — including one amendment that would provide $600 million in federal aid to Flint, Michigan)

SUMMARY OF KEY PROVISIONS (Provided by Committee on Natural Resources)