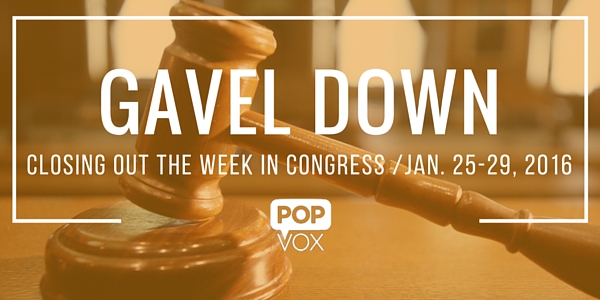 The Senate made it back into DC after snowstorm Jonas and began work on a major bipartisan energy bill. The House was out for a second week of snow days, postponing votes on limits to the President's ability to lift sanctions on Iran and a vote to override the veto of the reconciliation bill to repeal parts of the Affordable Care Act. 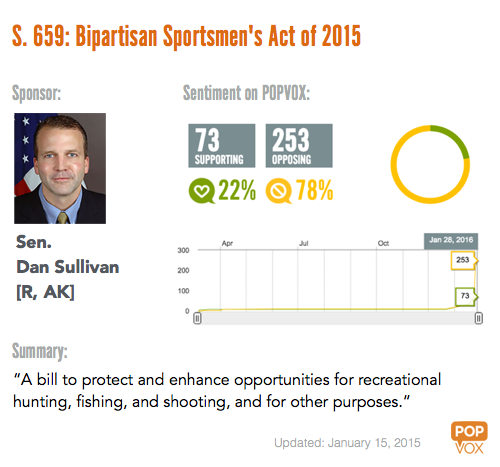 The last time major energy reform made it across the finish line it was 2007. Gas was $2.81 per gallon, Britney Spears kicked off historic breakdown, and the iPhone was released.  Since that time, U.S. energy production has changed dramatically. Wind and solar electricity now compose 15% of non-fossil electricity generation. Coal is still the largest share of U.S. electricity generation, but last year coal production declined by 11% — the largest decline ever recorded. U.S. electricity sales continue to decline each year as homes become more energy efficient and solar power becomes more popular.

On Thursday, the Senate adopted three amendments to the energy bill. (130+ amendments have been proposed — including one amendment that would provide $600 million in federal aid to Flint, Michigan)


The Senate will convene on Monday and resume consideration of the bill. The White House expressed concerns but did not issue a veto threat.

Tell your lawmakers what you think of the Energy Policy Modernization Act!

We're all hearing a lot about the Zika virus, which, according to the World Health Organization, is "spreading explosively" in the Americas and could reach four million cases this year. As of Friday, there were 31 reported cases in the U.S.

The virus is spread to people through mosquito bites and most common symptoms are fever, rash, joint pain, and conjunctivitis (red eyes). The illness is usually mild with symptoms lasting from several days to a week. Severe disease requiring hospitalization is uncommon. – Source: Centers on Disease Control

The White House has called for "more research on diagnostic testing, vaccines and therapeutics," while emphasizing that it "poses a far different — and less severe — threat than the recent Ebola epidemic." The virus is most dangerous to women who are pregnant. The World Health Organization will convene a committee of experts Monday to "decide whether the outbreak of the virus should constitute a public health emergency of international concern."

House Democrats gathered in Baltimore for their annual retreat this week, themed “United for Opportunity.” Members heard from comedian Trevor Noah, who spoke about his childhood in South Africa, and from environmentalist, Tom Steyer, who discussed climate change.

Vice President Joe Biden spoke to the caucus with an optimistic view of Democratic prospects for retaking the House, and pitched TPP, which Democrats say they “are reviewing” though many remain noncommittal on the President’s signature trade agreement. Vice President Biden shared an emotional moment with Congressman Mark Takai in the context of their family struggles with cancer. President Obama has enlisted Biden in a "moonshot" effort to treat and cure cancer.

President Obama delivered an upbeat message to the caucus, and reportedly took questions from Members about White House policies on refugees and immigration, the water crisis in Flint, Michigan, and the recent release of hostages held in Iran.