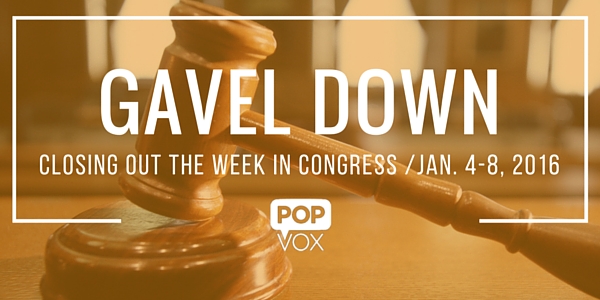 The House returned for the second session of the 114th Congress, starting with a long-awaited vote on the reconciliation bill to repeal parts of Obamacare and defund Planned Parenthood (which was promptly vetoed). President Obama ruled the headlines, with announcement of executive actions to address mass shootings — and the responses that the policy drew. North Korea and Iran policy again moved to the forefront, and will likely be the focus when the Senate returns next week, and when President Obama gives his final State of the Union address on January 12.

Most active action on POPVOX this week:
Executive Actions to Reduce Gun Violence
(POPVOX occasionally makes policy proposals available for input that have not been formally introduced as bills in Congress.)

President Obama ruled the headlines this week, with his announcement of new executive policies to address gun violence. The announced actions include requests for more resources for law enforcement, steps to close the "gun show loophole" on background checks, and an emphasis on technology and increasing mental health treatment.

Members of Congress responded along party lines: Speaker Ryan expressed strong opposition. Senators called for a hearing on the efficacy of gun-related research done by the Centers for Disease Control and Prevention. Members of the House Appropriations committee sent a letter to Attorney General Loretta Lynch discouraging any requests for funding to implement the President's policies.

Several related bills were introduced in Congress this week:

As expected, the House passed the Budget Reconciliation bill on Wednesday. By a vote of 237-177, the House sent the bill to eliminate much of the Affordable Care Act (Obamacare) and de-fund Planned Parenthood to the President's desk.  Also as expected, the President vetoed the bill on Friday afternoon.
How did your representative vote?

The House also passed several regulatory reform bills, including the Searching for and Cutting Regulations that are Unnecessarily Burdensome (SCRUB) Act (H.R. 1155) that would create a bipartisan panel to review federal regulations with the ability to sunset or eliminate them. The Sunlight for Regulatory Decrees and Settlements Act (H.R. 712) would limit the practice of "rulemaking through litigation," in which interested parties sue agencies and the resulting consent decrees, settlements or compelled outcomes result in new regulations. The bills now go to the Senate.

North Korea announced it conducted a successful hydrogen bomb test. Nuclear experts are skeptical about the claim (saying the size of the blast was consistent with an atomic explosion), but the news of the nuclear explosion spurred lawmakers to revisit long-delayed legislation that would expand sanctions against North Korea.

Monday's nuclear blast was the fourth nuclear test from North Korea and the first since February 2013. The House is now preparing a bipartisan package of new economic sanctions in response. The legislation would target foreign companies doing business with North Korea, reduce North Korea's access to U.S. financial markets, and authorize the U.S. to sanction any entities transferring assets to North Korea.

House Foreign Affairs Chairman Rep. Ed Royce [R, CA-39] introduced The North Korea Sanctions Enforcement Act (H.R. 757) last year. The committee marked up the bill in February 2015 and passed it by voice vote, but the bill did not make it to the House Floor for a vote.

Nuclear Weapons: Who Has Them?

The House Committee on Foreign Affairs cleared a bill that would prevent the Obama administration from lifting sanctions on Iranian banks and government officials until certifications are submitted to Congress — verifying the entities were not involved with nuclear proliferation or terrorist activities.

The Iran Terror Finance Transparency Act (H.R. 3662) would give Congress increased oversight over Iran nuclear deal and is scheduled for a vote next week.

Hours after House Foreign Affairs advanced the bill, Secretary of State John Kerry spoke on the progress of executing the nuclear deal. The legislation would interfere with the Obama administration's implementation plans. He cited "significant results" such as last week's enriched uranium stockpile delivery to Russia. "We are days away from implementation if all goes well," Kerry said.

Senate is expected to vote on Iran Sanctions Act (S. 1682) later this month. The legislation would extend a package of sanctions set to expire next year, but there's talk that such a move would constitute a violation of the Iran nuclear deal.

The Puerto Rico Emergency Financial Stability Act would place a stay on creditor lawsuits through March in an effort to help Puerto Rico's financial situation until "comprehensive relief" legislation can be passed. The Duffy bill would grant Chapter 9 bankruptcy in exchange for a federal fiscal control board on Puerto Rico, whereas the Puerto Rico Assistance Act would address the island's $73 billion debt crisis without allowing bankruptcy.

The Trans-Pacific Partnership received three major endorsements this week: National Association of Manufacturers, Business Roundtable, U.S. Chamber of Commerce. The endorsements were expected, but support from the private sector is crucial in convincing GOP leaders to vote and ratify the agreement before year's end.

Coming Up: State of the Union

President Obama will give his final State of the Union address on January 12, 2016 at 9 PM ET (National Journal has some advice from other second-termers on the special nature of the last speech.)
South Carolina governor Nikki Haley will deliver GOP response, fueling talk that she is the establishment choice for the VP slot on an eventual GOP ticket. Author, Wayne Allyn Root will deliver the Tea Party response.

On Friday, the White House announced that one seat in the First Lady's box will remain empty during the speech, "for the victims of gun violence who no longer have a voice." The Washington Post reports that Laura Bush also left an empty chair at a previous SOTU speech, in memory of those who lost their lives on September 11, 2001.

While Washington returned to work this week, several lawmakers and Administration officials were on hand for the annual Computer Electronics Show (CES) in Las Vegas. Drones, Virtual Reality, and Autonomous Cars were everywhere on the show floor, with new technologies spurring policy questions.

Sign up now to be notified when we launch in your state!

"2016 in Congress: Five Things to Watch" by Molly Reynolds, Brookings

"Why Polls Have Been Wrong Recently" by Nate Cohn, The New York Times

"Can Congress maintain its 2015 momentum in 2016?" by Bruce P. Mehlman and David Castagnetti, The Hill

Editor Follow
« Issue Spotlight: Weigh in on the President’s Executive Actions to Combat Gun Violence
WEEKLY UPDATE: The Week Ahead in Congress »