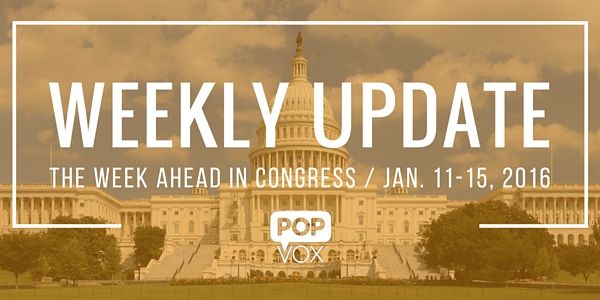 This week: Senate returns and Obama's final State of the Union

Washington will be back in full swing this week as the Senate returns and the President addresses a joint session on Tuesday evening with his final State of the Union Address. On tap in the Senate: advancing a bill to “Audit the Fed.” In the House, government transparency, oversight of Iran and North Korea and “disapproving” the Administration's “Waters of the United States” rule from the EPA.

In the Senate: Auditing the Fed

In the Senate, the first major vote of the Second Session of the114th Congress will be Senator Rand Paul’s “Audit the Fed” bill, to require a full audit of the Board of Governors of the Federal Reserve System and the Federal reserve banks by the Comptroller General of the United States. The Senate will hold a cloture vote on Tuesday.

Sponsor: Sen. Rand Paul [R, KY]"The legislation, S.2232, would eliminate restrictions on the U.S. Government Accountability Office audits of the Federal Reserve and mandate that the Federal Reserve's credit facilities, securities purchases, and quantitative easing activities be subject to congressional oversight," according to the sponsor.

In the House: Restrictions on Lifting Iran Sanctions

The House will vote on a bill that would prevent the Obama administration from lifting sanctions on Iranian banks and government officials until certifications are submitted to Congress — verifying the entities were not involved with nuclear proliferation or terrorist activities.

This bill prohibits the President from removing sanctions on foreign financial institutions until the President makes two certifications to Congress: (1) that the institution has not knowingly facilitated transactions or provided significant financial services for or on behalf of Iran's Revolutionary Guard Corps or any of its agents, a foreign terrorist organization, or a person whose property or property interests are blocked pursuant to the IEEPA in connection with Iran's proliferation of weapons of mass destruction. (2) that the institution no longer knowingly engages in illicit or deceptive financial transactions or other activities.

Also in the House: a bil from Foreign Affairs Chairman Rep. Ed Royce [R, CA-39] to require the President to investigate threats by North Korea. The bill passed committee in February 2015 by voice vote. The House plans to take up the bill this week in response to North Korean claims that it conducted a successful hydrogen bomb test (notwithstanding skepticism from nuclear experts about the claim.)

This bill requires the President to investigate any credible information of sanctionable activities involving North Korea and to designate and apply sanctions with respect to any person (including entities) knowingly engaging in or contributing to activities in North Korea, through export or import, which involve weapons of mass destruction, significant arms or related materiel, significant luxury goods, money laundering, censorship, or human rights abuses.

This week the House will vote on several bills to regarding public access to government information:

"The FOIA Oversight and Implementation Act of 2015 would establish a presumption of openness for releasing information while creating electronic accessibility for frequently released information.  The Issa-Cummings bill would also strengthen oversight and review of FOIA compliance, as well as dispute resolution from the Office of Government Information Services," according to the sponsors.

"This legislation would require agencies to close out expired, empty grant accounts. It would also require federal agencies to identify exactly why those accounts were never closed in the first place," according to the sponsors.

"The  legislation requires each federal agency to produce an annual report that identifies every program with a description of the program and its costs," according to the sponsors.

Two proposals in the House this week would block the Obama Administration's implementation of new environmental regulations:

The bill would prevent implementation of new regulations limiting coal extraction in a newly established "buffer zone" around streams and waterways. According to the bill's sponsor, "the bill would prevent the administration from implementing a new stream buffer zone rule intentionally designed to shut down all surface mining and a significant section of underground mining in the Appalachian region.”

S.J.Res.22: RESOLUTION DISAPPROVING THE EPA RULE RELATING TO THE DEFINITION OF "WATERS OF THE UNITED STATES" (WOTUS)

Also in the House this week:

This bill requires any nicotine provided in a liquid nicotine container to be packaged in accordance with the Consumer Product Safety Commission's (CPSC's) standards and testing procedures for special packaging that is difficult for children under five years of age to open or to obtain harmful contents from.

"The legislation would set pensions for former presidents at $200,000 and survivor benefits for spouses would increase to $100,000, adjusted annually to reflect the Social Security cost of living increase. Under the proposed bill, the annual allowance for costs associated with post-presidential life, including travel, staff, and office expenses, would be reduced dollar-for-dollar for every dollar of outside income earned by a former president in excess of $400,000. This would have no impact on funding for security or protection," according to the sponsors.

Requires each presidential library fundraising organization to submit quarterly reports to the National Archives and Records Administration on every contributor who gave the organization a contribution or contributions (whether monetary or in-kind) totaling $200 or more for the quarterly period.

The measures would protect unpaid interns who work at federal agencies. According to the sponsors, the bills would:

South Carolina governor Nikki Haley will deliver GOP response, fueling talk that she is the establishment choice for the VP slot on an eventual GOP ticket. Author, Wayne Allyn Root will deliver the Tea Party response.

Think nothing ever comes of what gets discussed in the SOTU? Think again.

Washington watchers look to the First Lady's guest list for clues about the major themes of the speech, and this year is no different. Guests will include: