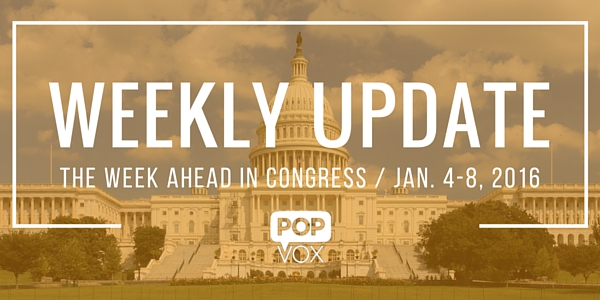 This week Members will make their way slowly back to Washington to begin the second session of the 114th Congress. The Senate is out for another week while the House will gavel in on Tuesday afternoon and take its first big vote of the year on Wednesday — on the Reconciliation bill repealing parts of Obamacare and defunding Planned Parenthood. An announcement is expected from the other side of Pennsylvania Avenue this week, as President Obama prepares an executive action on gun control.

In the House: Reconciliation

By now you know — "reconciliation" is an expedited process for special bills that reduce the budget deficit to come up for consideration in the Senate without a 60-vote cloture threshold. The current reconciliation bill, H.R. 3762 from Rep. Tom Price [R, GA-6], would repeal key parts of the Affordable Care Act: the individual mandate, the employer mandate, and the Independent Payment Advisory Board (IPAB), and would defund Planned Parenthood for one year.

The House will also vote on several bills that would bring changes to the regulatory system and class action lawsuits.

The SCRUB Act (Searching for and Cutting Regulations that are Unnecessarily Burdensome" is designed to identify and eliminate outdated and ineffective regulations. The legislation put a bipartisan, BRAC-style commission in place to review regulations and make recommendations for repeal,” according to the sponsor.

H.R. 712: SUNSHINE FOR REGULATORY DECREES AND SETTLEMENTS ACT OF 2015

The bill "seeks to end the practice of enacting federal regulations through sue-and-settle litigation"… According to the sponsor: "“Regulation by litigation subverts the normal regulatory process, denying Americans, especially Northeast Georgians who depend on agriculture, a seat at the national table. This bill would shed light on backroom deals between federal agencies and special interests – increasing transparency to provide the public its say in executive decision-making. This Administration’s rush to settle with litigious outside groups is costing us jobs and income. We’re giving more people a voice in the outcome."

“The Fairness in Class Action Litigation Act is a simple, one-page bill, that furthers a common sense principle that should apply to class action lawsuits in the future. Only those people who share injuries of the same type and extent should be part of a class action lawsuit,” according to the sponsor.

While details are still emerging, President Obama has said that he will announce a gun control initiative this week, with a television town hall planned for Thursday evening. (Read more on the proposed action from CNN and the Washington Post.)

Many bills have been introduced in Congress regarding gun control, background checks, and Second Amendment rights. Here is a sample:

THE DENYING FIREARMS AND EXPLOSIVES TO DANGEROUS TERRORISTS ACT (S. 551 and H.R. 1076)

A bill to "deny the transfer of a firearm or the issuance of a firearms or explosives license or permit (or revoke such license or permit) if the Attorney General: (1) determines that the transferee is known (or appropriately suspected) to be engaged in terrorism or has provided material support or resources for terrorism, and (2) has a reasonable belief that the transferee may use a firearm in connection with terrorism. Allows any individual whose firearms or explosives license application has been denied to bring legal action to challenge the denial."

Denies the District of Columbia any authority to enact laws or regulations that discourage or eliminate the private ownership or use of firearms for legitimate purposes; repeals current Firearms Control Regulations Act (FCRA) definition of a machine gun as any firearm designed to shoot more than 12 shots without manual reloading; repeals the ban on semiautomatic weapons; and the District's registration requirement for possession of firearms, eliminates criminal penalties for possession of unregistered firearms… among other provisions

"make[s] it unlawful for any person to operate a gun show unless such person: (1) has attained 21 years of age; (2) is not prohibited from transporting, shipping, or receiving firearms and has not violated any federal firearms requirements; (3) has registered with the Attorney General as a gun show operator and has provided a photograph and fingerprints; (4) has not concealed material information nor made false statements in connection with a gun show operator registration; and (5) notifies the Attorney General of the date, time, and duration of a gun show not later than 30 days before the commencement of such show and verifies the identity of each vendor at the gun show."

To eliminate the requirement that a firearms dealer transfer a firearm if the national instant criminal background check system has been unable to complete a background check of the prospective transferee within 3 business days.

"To regulate assault weapons, to ensure that the right to keep and bear arms is not unlimited, and for other purposes."

Editor Follow
« Gavel Down: Closing out the Year in Congress: 2015
Issue Spotlight: Weigh in on the President’s Executive Actions to Combat Gun Violence »