This Week on POPVOX

Most Active Bill on POPVOX:

To provide that silencers be treated the same as long guns.

New Speaker On The Block

This week in Congress was one for the history books. John Boehner led the House in passing a bipartisan budget deal, aka the “Boehner Budget,” before making his retirement official. Paul D. Ryan of Wisconsin took the oath of office as the youngest Speaker of the House since 1869. As several noted, his remarks were hopeful, aspirational, and struck a bipartisan tone, borrowing from Harry Truman:

“… if you ever pray, pray for each other — Republicans for Democrats, Democrats for Republicans. And I don’t mean pray for a conversion. Pray for a deeper understanding, because — when you’re up here, you see it so clearly — wherever you come from, whatever you believe, we are all in the same boat.”
Read full remarks.

John Boehner told the House goodbye, “with no regrets, no burdens. If anything, I leave the way I started, just a regular guy, humbled by the chance to do a big job.”
In shepherding the two-year Bipartisan Budget Act, which some are calling the “Boehner Budget,” Boehner made good on his pledge to “clean the barn” before leaving. The deal funds the government and eliminates the debt ceiling for two years, staves off an increase in Medicare premiums — it even renames a Capitol corridor the “Freedom Foyer.”
The Senate passed the budget deal at 3 AM on Friday morning, delayed by objections from Presidential candidates Sen. Rand Paul (R, KY) and Sen. Ted Cruz (R, TX) (procedural rules did not allow for a filibuster, but the two Senators took available opportunities to speak against the deal). As did Sen. Pat Toomey (R, PA) who said the bill “fails to address our overspending problem.” In the end, the Senate passed the deal 64-35, and it is expected to soon be signed by the President.
While the appropriations process awaits, the budget deal means that government shutdown and debt ceiling brinksmanship will not be a factor until after the 2016 election. One House staffer told us it felt like the “fever broke” on the gridlock and acrimony of recent years.

How did your Senator vote on the Bipartisan Budget Act? 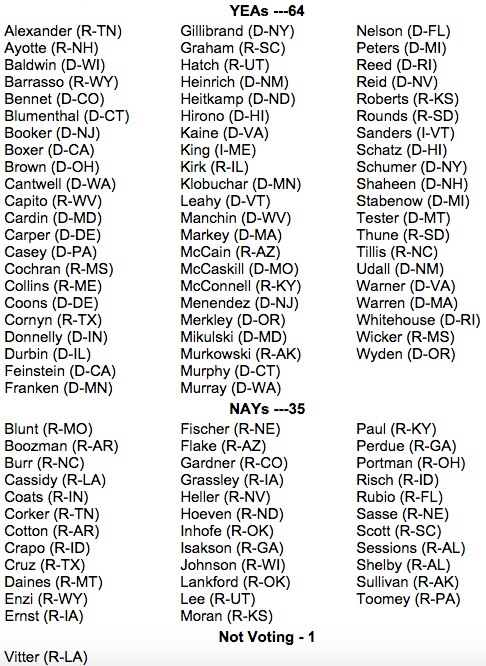 Today, the Obama Administration authorized “several dozen” U.S. Special Forces to enter Syria and combat the Islamic State. Members of Congress immediately weighed in on the decision. Sen. Lindsey Graham (R, SC) said this new decision looks like weakness to the enemy, and called the current strategy “half-assed at best” earlier in the week. Sen. Tim Kaine (D, VA) said, “It’s time for Congress to debate and declare war” and called for a comprehensive conflict strategy. How does this new “boots on the ground” decision affect Syria peace talks in Vienna?

Editor Follow
« Attempts to Invalidate the Clean Power Plan rule with the Congressional Review Act (CRA)
The Week Ahead in Congress: Nov. 1 – Nov. 6 »