It's been 419 days since Justice Antonin Scalia's death, and he finally has a successor to the Supreme Court.

On Friday, the Senate confirmed Judge Neil Gorsuch to the Supreme Court by a vote of 54-45. Gorsuch is the youngest nominee in decades and could serve on the court for upwards of 30 years.

This week’s confirmation of Judge Gorsuch required Senate Majority Leader Mitch McConnell to make a formal change to Senate precedent – the requirement for sixty votes to end debate and proceed to a vote. The so-called “nuclear option” allowed McConnell to rule that a simple majority vote was enough to consider the nomination. This ruling by the chair was then upheld by a majority of senators, ending the 60-vote filibuster for Supreme Court nominees. That left the final confirmation vote, which came earlier than expected on Friday.

It's been over a year since President Obama first nominated Judge Merrick Garland for the vacancy. Senate Republicans refused to hold hearings or votes on the nomination, with McConnell citing much-contested Senate precedent of not approving a president's nominee in the final year of his term.

No word on when Gorsuch will be sworn in as an official associate justice, so for now, learn about the newest justice to the Supreme Court: 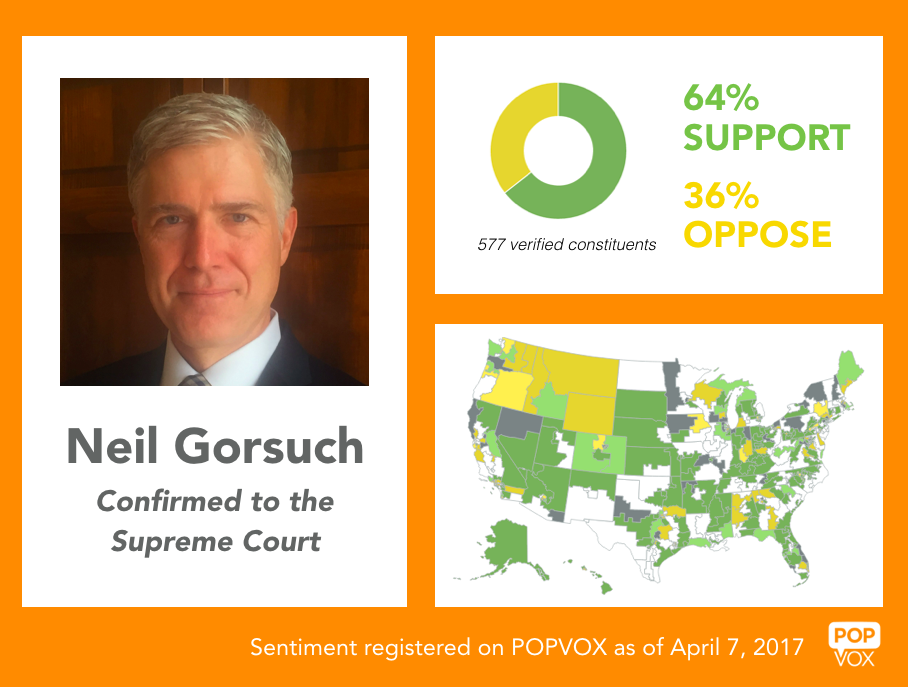 On Tuesday there were reports of a chemical attack in Syria that killed over 70 people. On Thursday night, the Pentagon released details on U.S. missile strike on Syria. The Trump administration notified Russian officials in advance of the strike. Members of Congress reacted with a mix of praise and concern, with many calls for the administration to seek authorization from Congress for the use of military force.


You've probably been hearing about AUMFs. If you're scratching your head, here's the deal: AUMF stands for Authorization for Use of Military Force. As the name suggests, it refers to Congress authorizing military force.

According to the War Powers Act, the President may command U.S. armed forces for a military operation overseas but must notify Congress within 48 hours. These forces cannot operate in a deployed status for more than 60 days without a congressional declaration of war or an authorized use of military force (AUMF).

The last AUMF authorized was in 2001, in the wake of the 9/11 terrorist attacks, authorizing the use of U.S. Armed Forces against those responsible for the attacks on September 11, 2001 and any “associated forces.”

Two AUMF resolutions have been introduced this Congress. They're identical resolutions that would authorize the use of military force against the Islamic State in Iraq and Syria. See the resolutions from Senator Young and Congressman Banks. 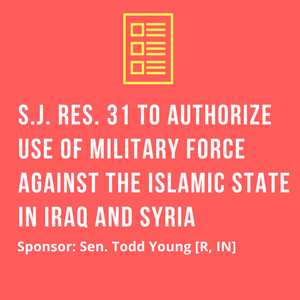 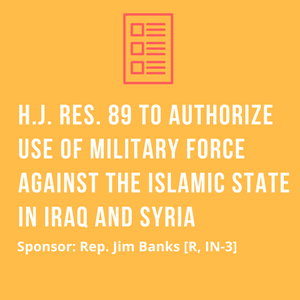 
This week, the White House and Republican lawmakers discussed ways to resurrect the Obamacare replacement legislation after House Leadership pulled a vote on the American Health Care Act (AHCA) last week. Vice President Mike Pence met with both the conservative House Freedom Caucus and moderate Republican members to discuss changes to the legislation, with reported discrepancies.

On Thursday, the House Rules committee marked up an amendment to the bill, setting up vote for after recess (or possibly before per memo from House Majority Leader Kevin McCarthy). The new language would create $15 billion federal high-risk pool to provide insurance coverage to Americans with pre-existing and serious health conditions. Pool would be replaced by individual state-run high-risk pools in 2020.


This week House Intelligence Chair Devin Nunes stepped aside in Russia investigation, amid calls from bipartisan lawmakers to do so. Questions arose regarding Nunes' relationship with the Trump administration after he went to the White House to review Trump campaign communications. Nunes then shared the information with President Trump and the public before sharing it with committee members. Nunes is now under House ethics investigation per House rule that requires investigation whenever classified information is in play.

New reports this week that former CIA Director John Brennan briefed eight top members of Congress last August on increasing evidence of Russian interference in the election. Reportedly, the CIA obtained evidence early in summer and was confident by late August, whereas the FBI did not publicly draw this conclusion until early December. Brennan told lawmakers the FBI would have to take the lead because the CIA deals exclusively with foreign intelligence. Brennan was scheduled to testify before House Intelligence, but Chair Nunes cancelled the hearing.

President Trump said the U.S. is ready to act alone on North Korea if China doesn't take a firmer stand, teeing up topic of conversation for this week's visit from Chinese President Xi Jinping.