Another jam-packed week on the Hill…


This week lawmakers weighed in on reports that Attorney General Jeff Sessions communicated with Russian ambassador Sergey Kislyak during the presidential campaign, contradicting his Senate testimony.

Sessions failed to disclose this communication while under oath during his confirmation hearing. He testified before Senate Judiciary that he was not aware of anyone affiliated with the Trump campaign having met with Russian officials. In response to a question submitted for the record, he said he had not been in contact with anyone connected to the Russian government regarding the election.

Sessions maintained that his conversations with the ambassador were part of his official duties as a senator and member of the Senate Armed Services committee (rather than a Trump surrogate). It was later revealed that Sessions used campaign funds for convention expenses, including the meeting with the Russian ambassador.

Overwhelmed with all this information? Here's a timeline of the events.

A day after the information was made public, Sessions recused himself from any investigation the Justice Department carries out regarding Russian interference in the 2016 presidential election.

Later in the week, more Trump advisers disclosed meetings with the Russian ambassador, including Carter Page and J.D. Gordon and more well-know advisers Michael Flynn and Jared Kushner. Last month, Michael Flynn resigned from his post as national security adviser over reports that he misled White House officials about his conversations with Russia. His 24-day tenure was the shortest in history for a national security adviser.

President Trump said Sessions "did not say anything wrong." Noting that Sessions "could have stated his response more accurately, but it was clearly not intentional."

This week President Trump delivered his first address to a joint session of Congress. He mentioned proposals for immigration reform, infrastructure, trade, tax reform, education, terrorism, and replacing the Affordable Care Act. Morning Consult has your back with a quick recap of the biggest moments. Read the full speech.

Why was it an address rather than a State of the Union?  Simply put, because that's what Speaker Ryan invited the president to deliver. It follows precedent and is typical of first year presidents because they haven't been in office long enough to "authoritatively describe the state of the union." President Ronald Reagan began the tradition of a presidential address to Congress about a month after taking office, and it has continued ever since. Learn more and troll your friends who keep referring to it as the State of the Union.

Why did several lawmakers dress in all-white? Many of the 66 Democratic female lawmakers wore white clothing in a nod to the women's rights movement in the early 1900s.

And hey, next time you want to wear slippers to work, cite Commerce Secretary Wilbur Ross as precedent, and carry on!

This week was an unusual week on the Hill with reports of a "secret" bill in a "secure location" and a scavenger hunt ending with lawmakers talking to statues.

Let's explain: The week began with several Republican lawmakers coming out against a leaked Obamacare replacement plan that would shrink subsidies and eliminate the Medicaid expansion.

Republican Sens. Cruz, Lee, and Paul opposed the plan, instead calling for a full repeal of the Affordable Care Act. The senators said the 2015 repeal bill should be the "bare minimum" for new legislation, mirroring calls from the House Freedom Caucus. Freedom Caucus Chair Mark Meadows's wife sent emails to North Carolina Republicans urging them to call Congress to oppose the proposed legislation.

As the week progressed, word emerged that House GOP leaders would introduce new legislation next week to overhaul the Affordable Care Act. The super secret legislation was kept in a secure location, and as of Thursday, only House Energy and Commerce Republicans and staffers could view the legislation. This led to lawmakers on a scavenger hunt around the Capitol in pursuit of the legislation, ending with House Minority Whip Steny Hoyer talking to Lincoln's bust. As of today, Senator Rand Paul was still looking for the secret Obamacare bill.

Reportedly, a House committee will mark up the proposal next Wednesday. This means the legislation will move through committee before the Congressional Budget Office (CBO) has the opportunity to complete a cost estimate. However, the bill can be modified by House Budget or Rules once the CBO scores the legislation.

So what do you do in the meanwhile?  Hang tight, and we'll keep you posted when the new legislation is released. One of the most important times to weigh in on legislation is when a bill is marked up.

Why does the Senate read President Washington's farewell address each year?

The tradition began as a way to boost morale during the Civil War and has continued without interruption since 1896. A different senator is selected each year (alternating between political parties) to read the 7,461-word address. Delivery typically takes about 45 minutes. It is one of the Senate's longest and most bipartisan traditions. Learn more about the tradition, and read the full address.

Ask us anything and see your questions answered in future editions! 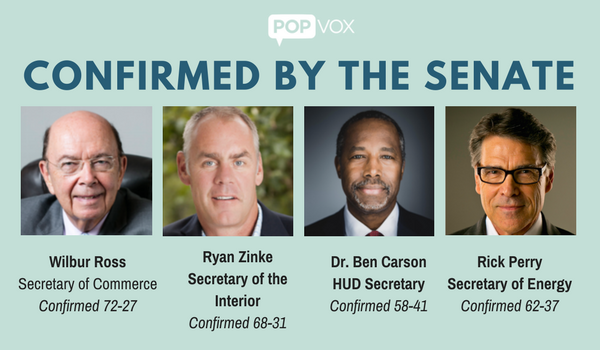 So how's this all work, anyways? Well the president typically submits a budget proposal to Congress. It reflects the president's priorities and plan for the country. However, Congress hashes out the final spending plan. Yep, that's right. It's time to talk about appropriations again!

Appropriations are the annual decisions Congress makes about how the federal government should spend money (think about allotting money for various things like how you would with your own budget). It can get complicated, but in general, the appropriations process addresses the discretionary part of the budget. This includes spending on national defense to education but excludes mandatory spending, such as Medicare and Social Security (this is based on an automatic formula). The Committee for a Responsible Federal Budget can get you caught up to speed with this explainer. For a more elaborate look, check out this report from the Congressional Research Service.

This week the House version of FY17 defense appropriations was released, with a vote expected next week. The $578 billion appropriations bill dropped later than usual and would authorize $61.8 billion in emergency war funding. If you're scratching your head because it's already 2017, here's the deal — The Defense Department has been operating on 2016 funding since the beginning of FY17 last October. The department can not begin new programs or alter funding levels until Congress passes the 2017 appropriations bill. Last Congress failed to pass the FY17 defense appropriations, and this spending bill "closely reflects" the version that passed the House. Check out the explanatory statement, as well as the bill highlights and full text.

Meanwhile, the House passed a handful of bills related to regulatory reform, including:

These bills now head to the Senate for consideration. Be sure to share your thoughts with your senators!

What's up with the Nominations Process?

Shoutout to Nancy W. for today's question — What's going on with the nomination process? There are too many to keep up!

No worries, there really are. In fact, there are 552 key administration positions that require Senate confirmation. So far, President Trump has nominated 35 people for these positions (6% of the total number needing confirmation). The Senate has confirmed 18 nominees or 51% of the total nominated. Check out the 18 nominees that have been confirmed.

Now let's look at the remaining 17 nominees that are awaiting confirmation. 13 of these have been referred to the relevant committees of jurisdiction, while four await referral.

Of the 13 that have been referred to committees, three have had confirmation hearings, with one being reported favorably and awaiting full Senate action.

Catch up on these confirmation hearings you may have missed:

To keep up, check out this database from The Washington Post and the Partnership for Public Service.