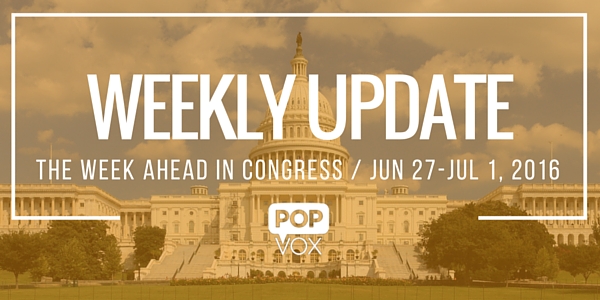 Bills up for a vote in Congress this week

House members have a district work period before the July 4 holiday. The Senate is in and will take up Mil Con/VA appropriations bill with Zika funding and a Puerto Rico debt restructuring bill.


The Senate will vote on the Military Construction / VA Appropriations conference report (H.R. 2577), which contains funding to address the spread of the Zika virus. (Read full summary)

On Wednesday, House and Senate Republicans announced the deal on Zika funding as House Democrats (joined by many Democratic senators) were staging a sit-in on the House Floor calling for action on gun control measures. The bill passed the House 239-171.

The compromise includes $1.1 billion in funding, as approved by the Senate last month, but less that the President’s original request of $1.9 billion. The bill is funded by $750 million in spending cuts, including $543 million in unused implementation funds for Obamacare and $107 million in cuts to leftover Ebola funding. (Read summary of Zika provisions).


Congress is rushing to pass a bill to allow Puerto Rico to restructure its debt before a $1.9 billion payment comes due on July 1. The PROMESA Act (H.R. 5278) passed the House on June 8. The Senate will take up the bill this week.

Senate Democrats have expressed concern about the bill and intend to offer amendments. However, since the House is out of session until after July 4, the only option for getting a bill before the July 1 deadline would be for the Senate to accept the House bill unchanged.

H.R. 5278 would create a legal framework for the federal government to oversee the fiscal and budgetary affairs of certain U.S. territories. In particular, the bill would outline procedures under which the governments of such territories and their instrumentalities could establish an oversight board and thus restructure their public debt. The bill would immediately establish such a board for the Commonwealth of Puerto Rico.