GAVEL DOWN: Closing Out the Week in Congress 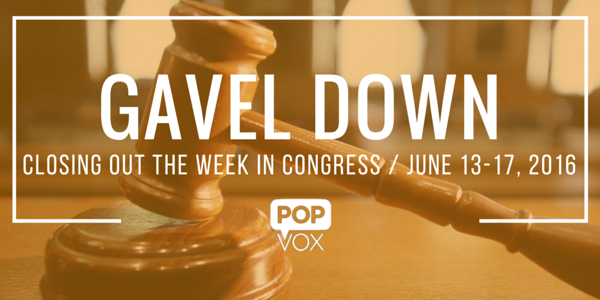 In the wake of the tragedy in Orlando, many policy proposals being discussed in Congress. Senator Chris Murphy led a 15-hour filibuster to call for votes on gun control legislation, which will happen on Monday in the Senate. Mental health legislation advanced through committee in the House. Separate House and Senate Defense Authorization (NDAA) bills passed, both under veto threats from the White House. And, changes to the 50-year-old Freedom of Information Act (FOIA) now heads to the President’s desk.

The Senate began the week voting on annual defense policy bill, then shifted to Commerce, Justice, Science (CJS) appropriations bill. On Wednesday, Sen. Christopher Murphy [D, CT] stood to speak and proceeded to hold the floor for the next 14 hours and 50 minutes, now the ninth-longest Senate floor speech since 1900. At one point, he apologized to his son for missing pizza night, saying "I hope that you'll understand someday why we're doing this."

As the filibuster reached its 12th hour, demonstrators gathered outside the Capitol, showing support for the effort. Democrats ended the filibuster Thursday morning at 2:11 am, as lawmakers reached agreement to hold votes on gun-related measures. Monday at 5:30 pm, there will be up to four cloture votes on gun-related amendments to CJS appropriations bill. Exact language is still emerging for some amendments, but the measures will focus on boosting background checks and barring suspected terrorists from purchasing firearms.

Two Democratic proposals and two Republican proposals will be up for vote. Grassley and Cruz proposal will be similar to previously introduced gun control bill.

The following bills are being referenced in the news. Read our expanded post for other bills related to this issue.

Bill would authorize DOJ grant program to encourage states to establish permit-to-purchase requirements for all handguns, including at gun shows with private sellers.

Bill would provide DOJ authority to prevent a known or suspected terrorist from purchasing firearms or explosives.

Bill would increase treatment for mentally ill people facing incarceration and strengthen requirements for full judicial hearing before person can be banned from purchasing guns.

Bill would prohibit the sale, transfer, production, and importation of new military-style weapons and high-capacity magazines.

The House approved a $575.8 billion FY2017 defense appropriations bill (H.R. 5293) by a vote of 282-138. The bill includes $58.6 billion for “overseas contingency operations” (OCO). “OCO” refers to the operations that were previously referred to as the Global War on Terror. (Read more from the Committee.)

The White House issued a veto threat for the bill, citing many points of disagreement, including what it deems “reduction and misuse of OCO Funds.” The White House takes issue with the reallocation of $16 billion in OCO funds to the base Defense budget to get around spending limits set in the Bipartisan Budget Act of 2015. (Read more from CRS on the OCO).

Catch up on this year's appropriations process.

Congress passed reforms to the 50-year-old Freedom of Information Act (FOIA). According to the Sunlight Foundation, one of the organizations pushing for the change: “The bill codifies a “presumption of openness,” strengthens the proactive disclosure of information in digital formats and the Office of Government Information Services, directs the White House to create software for creating requests, and requires all federal agencies to update their regulations.”

President Obama is expected to sign the bill, which a spokesperson said, makes “important upgrades to the FOIA system established nearly 50 years ago." The Administration also suggested that "extending FOIA to Congress would serve as another important step in increasing government transparency." (FOIA is currently only applicable to the Executive Branch of government.)

Despite a veto threat from the White House, the Senate passed 85-13 the National Defense Authorization Act for Fiscal Year 2016 (S.2943), sponsored by Sen. John McCain [R-AZ] with bipartisan support.

Read a summary of the bill here.

One of S.2943’s most controversial amendments was Sec. 591, which would require that women turning 18 on or after January 1, 2018 would be obligated to register for Selective Service in the same way men register now. The amendment was introduced in the Armed Services Committee, and consequently, was not debated on the Senate floor. Still, it remained a point of contention even after the bill passed.

The consequences for not registering would be the same men currently face, such as the possible loss of financial aid like Pell grants. However, this provision would not apply to women who turned 18 before January 2018. The amendment received support from military leaders and Republicans and Democrats alike in the Senate, but some more conservative members opposed it.

“The idea that we should forcibly conscript young girls in combat to my mind makes little sense at all,” said Senator Ted Cruz [R-TX]. However, neither Selective Service nor this amendment require that those conscripted into the armed services enter combat roles.

Last month, the House version of the NDAA, H.R. 4909, passed 277-147 despite a veto threat from the White House. However, chaos erupted on the House floor when several Republicans switched their vote on an amendment that would have prohibited federal contractors from discriminating against LGBT employees, causing the amendment to fail.

Read a Congressional Research Service summary of both the House and Senate versions here.

The House Energy and Commerce unanimously approved the Helping Families in Mental Health Crisis Act (H.R. 2646). During the markup, committee members shared stories of constituents they had met who suffered from or lost loved ones to mental illness and thanked Rep. Tim Murphy [R, PA-18] for his years of work on various versions of this bill.

Among other provisions, H.R. 2646 would create an Assistant Secretary of Mental Health in the Department of Health and Human Services and provide grants to track beds in psychiatric facilities. The bill aims to reduce gaps in the mental health system and strengthen its ability to respond to crises, particularly when concerning young people.

There was bipartisan support in committee, and Rep. Murphy is hoping to see a full House vote before August recess. E&C Chairman Fred Upton said the bill is likely to reach the House floor this fall.