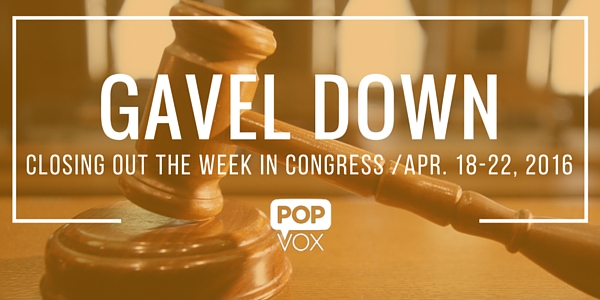 This week, the Senate passed a two-year FAA reauthorization bill, a major bipartisan energy reform bill, and moved onto Energy and Water Appropriations. The House passed six bills related to IRS operations and oversight. President Obama was in Saudi Arabia for a meeting with the heads of Persian Gulf countries as lawmakers consider bill to allow families of 9/11 victims to sue the Saudi government for any role it played in the terrorist attack. 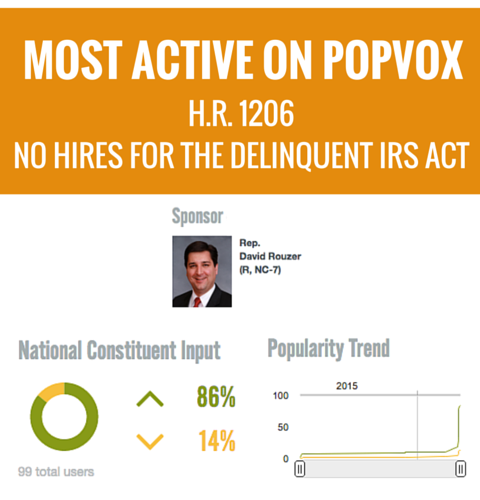 Most active bill on POPVOX this week:
H.R. 1206 NO HIRES FOR THE DELINQUENT IRS ACT


The last time major energy reform made it across the finish line it was 2007. Gas was $2.81 per gallon, Britney Spears was in the midst of a historic breakdown, and the iPhone had just been introduced. 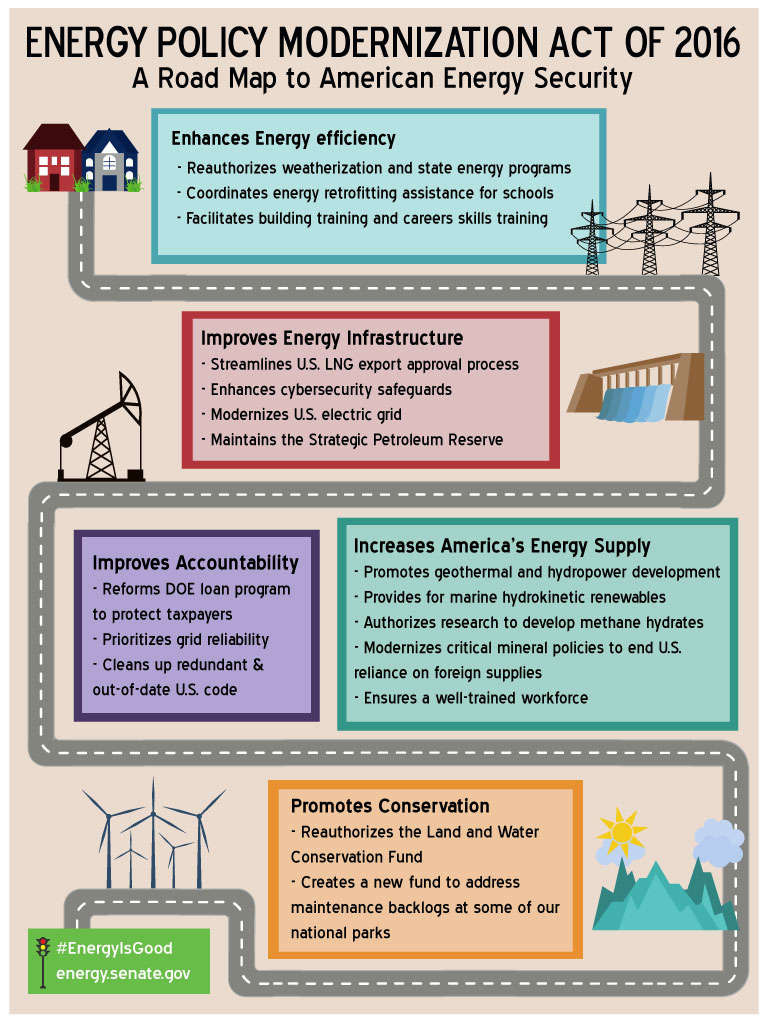 The bill’s been stalled since February over funding disputes for Flint, Michigan. Initially, Democrats pushed to include $600 million in federal aid and refused to debate a package that did not include funds for Flint. However, last week Democrats chose to drop the Flint provisions, allowing the Senate to finish up work and pass the legislation 85-12.

The Senate passed 29 amendments on Tuesday, including a measure to include energy efficiency into federal mortgage valuations.

On Thursday, two amendments failed: SA #3811 from Senator Hoeven would have blocked funding for implementation of the controversial "Waters of the United States" (WOTUS) rule .SA #3814 from Senator Coats would have ended the Advanced Technology Vehicles Manufacturing (ATVM) loan program. An amendment from Senator Al Franken passed: SA #3833  would fund the Department of Energy's (DOE) Tribal Energy Loan Guarantee Program.

The Senate will continue work on the bill next week.

In the spirit of Tax Week, the House passed six bills related to the Internal Revenue Service (IRS).

Four of the six bills moved quickly from committee to floor, being approved just last week by House Ways and Means.

H.R. 3724 ENSURING INTEGRITY IN THE IRS ACT
Sponsor: Rep. Kristi Noem [R, SD-0]
Bill would prohibit the IRS from rehiring former employers who had been fired for cause. This bill would apply to employees who were removed before, on, or after the enactment of this bill. No additional funds are needed to enact this bill.
How did your Rep vote?


H.R. 4890 IRS BONUSES TIED TO MEASURABLE METRICS ACT
Sponsor: Rep. Patrick Meehan [R, PA-7]
Bill would require the IRS to complete a customer service strategy before paying out bonuses, meaning bonuses would be earned through improvements in responsiveness to taxpayers. The customer service strategy would include telephone and correspondence surveys and proposals on how to improve customer service now and over the next ten years. The Treasury Secretary would submit progress reports twice a year. No additional funds are needed to enact this bill.
How did your Rep vote?


H.R. 4885 IRS OVERSIGHT WHILE ELIMINATING SPENDING (OWES) ACT
Sponsor: Rep. Jason Smith [R, MO-8]
Bill would require the IRS to deposit fees for services in general fund of the Treasury and provide Congress with the authority to determine how to spend user fees. The IRS would only be allowed to spend these funds through appropriations. This Act only applies to funds received after the date of enactment.
How did your Rep vote?

Bill would require the Treasury Secretary to certify that no IRS employees have serious delinquencies with respect to their own tax obligations. A serious delinquent tax debt refers to an outstanding debt under the 1986 IRS tax code with four exceptions. Two similar measures have failed in the last two years.
How did your Rep vote?

Lawmakers debated what to include in the reauthorization package, ranging from airplane seat sizes and airport security measures to commercial use of drones. Clean energy tax credits were not included, due to time and complications.

House Transportation and Infrastructure marked up the legislation in February, advancing it by a vote of 34-25. It has yet to receive a vote on the House floor.

FAA funding was set to expire on March 31, but the House approved a short-term bill to extend funding until July 15 (with some provisions extended until March 2017), providing a few more months for lawmakers to reach an agreement.

President Obama was in Saudi Arabia this week for a two-day summit in Riyadh with the heads of six Persian Gulf countries. “Deep tensions” with the U.S. and changes stirring within Saudi Arabia made for interesting dynamics and a “chilly reception."

In March, a senior Saudi Prince pushed back on comments by President Obama referring to foreign policy “free riders” in the Middle East. (see The Atlantic’s The Obama Doctrine)

More recently, Sens. Chris Murphy and Rand Paul introduced a bill (S.J.Res. 32) setting new conditions on U.S military aid to Saudi Arabia. The legislation requires that the president certify that Saudi Arabia is demonstrating an effort to “minimize harm to civilians” in the conflict in Yemen before Congress considers a selling air-to-ground munitions to Saudi Arabia.

Sens. Chuck Schumer and John Cornyn introduced a bill (S. 2040) that would allow the families of 9/11 victims to sue the Saudi government for any role it played in the terrorist attack.

President Obama has threatened to veto the measure, and Speaker Paul Ryan expressed skepticism, saying the House should take a closer look at the controversial legislation. Reportedly, President Obama did not discuss the bill while in Saudi Arabia. Sen. Lindsey Graham [R, SC] placed a hold on the bill, saying "I want to make sure that anything we do doesn't come to bite us."

The bill prompted Saudi Foreign Minister Adel al-Jubeir to tell a group of American lawmakers that Riyadh would divest as much as $750 billion in U.S. assets if the bill became law (New York Times).


The threat to sell off U.S. assets is rare. It is especially notable given the ambitious “National Transformation Plan,” that 31-year-old, second in line to the Saudi throne, Deputy Crown Prince Mohammed bin Salman described to Bloomberg recently. The plan will:

The Saudi move to diversify comes at a time of plunging oil prices due to falling demand and record production. Oil producing countries gathered in Doha last week to attempt to reach agreement on limiting production. The main sticking point was Iran, which refuses to cut production as it tries to rebuild its oil exports after international sanctions were lifted last year.

But don’t get used to the low gas prices. Experts are predicting they will rise again by the end of the year.

"Progress Made but Significant Challenges Must Be Addressed to Ensure Full and Effective Implementation"  from U.S. Government Accountability Office