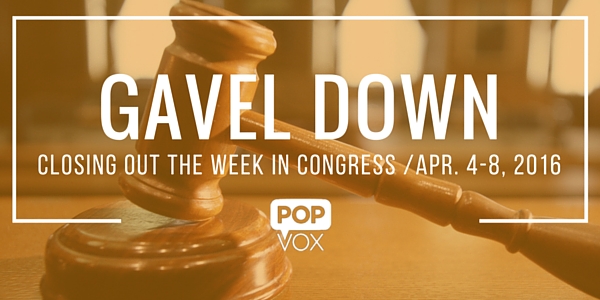 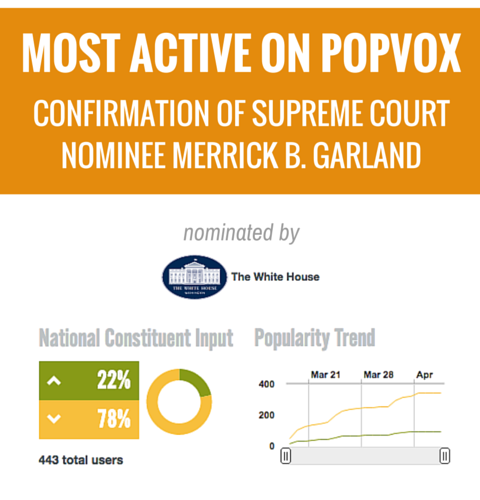 Most active bill on POPVOX this week:
Confirmation of Supreme Court Nominee Merrick B. Garland

A similar measure in the House has 127 co-sponsors. House Judiciary Chairman Bob Goodlatte announced this week that the committee will move forward with the bill soon.

Senate spent the rest of the week debating reauthorization of the Federal Aviation Administration, which runs out of funding on July 15. Senate voted unanimously to call up the bill and adopted two amendments aimed at strengthening airport security.

The first adopted amendment combined three bipartisan bills, with provisions to revise TSA's PreCheck program, strengthen security at foreign airports that have direct flights to the U.S., and prevent airport workers from carrying out terrorist attacks.

The second adopted amendment would increase the number of bomb-sniffing dog teams in non-secure areas, such as check-in counters and baggage claim. Many lawmakers referenced the Brussels attacks and the need for increased security in waiting areas.

The final amendment addressed seat sizes on airplanes and failed 42-54. Sen. Chuck Schumer [D, NY] introduced the amendment, saying "The public really cares about this. They don't want to be treated like sardines as the fares go up and up." Bill sponsor Sen. John Thune [R, SD] said "At 6'4", I experience firsthand leg-space issues on a weekly basis, but I just honestly think that it's not the FAA's place to decide how to define comfort."

Check out how your Senators voted on the following amendments:

Catch up on all the Senate floor action here!

This week the Obama administration unveiled long-awaited "fiduciary rule." This rule requires brokers to act in the “best interest” of their clients when handling retirement accounts instead of "acting suitably."

This rule is meant to protect workers from conflicting investment advice and improve disclosures. Opponents of the rule say that it would discourage financial firms from lower-income clients.

Sen. Warren called the fiduciary rule “the kind of change people want and expect in Washington.”

Last week we asked you to submit pictures of your Member working back home. Shoutout to Kitsap MOAA for being the first to respond with this picture from their luncheon!

The Senate Health, Education, Labor, and Pensions (HELP) Committee held its third and final markup on a series of medical innovations bills, designed to complement House-passed 21st Century Cures Act (H.R. 6). These bills are focused on getting new medicine and treatments to patients more quickly.

The biggest item of debate, additional funding for the National Institute of Health, has not reached a deal.

According to Senate HELP Chairman Lamar Alexander, “The House has done its work. The president has proposed his initiatives. I am hopeful we can take this to the Senate floor soon and ensure the president’s Precision Medicine and cancer ‘moonshot’ initiatives and ideas in the ‘Cures’ bill can become reality this year.”

"DOD Needs to Clarify Its Roles and Responsibilities for Defense Support of Civil Authorities during Cyber Incidents"  from the U.S. Government Accountability Office