Gavel Down Closing Out the Week in Congress 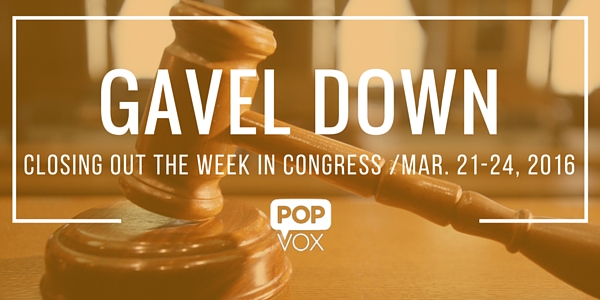 Most Active on POPVOX this week:
Confirmation of Supreme Court nominee Merrick B. Garland 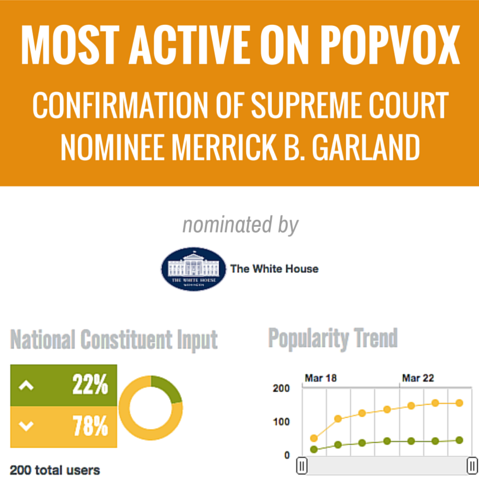 The House unanimously passed a resolution condemning the terrorist attacks in Brussels, for which ISIS has claimed responsibility. More than 30 people were killed and over 200 injured in the airport and metro attacks.

H.RES. 658 CONDEMNING IN THE STRONGEST TERMS THE TERRORIST ATTACKS IN BRUSSELS ON MARCH 22, 2016, WHICH MURDERED MORE THAN 30 INNOCENT PEOPLE, AND SEVERELY WOUNDED MANY MORE.
Sponsor: Rep. Ted Poe [R, TX-2]

In response to the Brussels attacks, capitals around the world tightened security by halting international trains and increasing police presence in the streets and airports.

Senate Majority Leader Mitch McConnell said, “Our nation stands in solidarity with the people of Belgium and we will renew our determination to prevent more senseless violence against the innocent.”


Speaker Paul Ryan addressed group of bipartisan House interns on the state of American politics, calling for civility in political discourse.  The "remarkably candid speech" highlighted the importance of differing opinions and how to disagree respectfully. He recounted his days as an intern and how he worked his way up from being a waiter at Tortilla Coast. Speaker Ryan referenced America's history, our founding fathers, and the need for politics based on policy rather than personality.

Here are five top quotes, as well as the full speech:

1. "We treated each other with respect. We disagreed — often fiercely so — but we disagreed without being disagreeable…It almost sounds like I'm speaking of another time, doesn't it? It sounds like a scene unfamiliar to your generation."

3. "Ideas, passionately promoted and put to the test — that's what politics can be."

4. "Governing ourselves was never meant to be easy… When passions flair, ugliness is sometimes inevitable. But we shouldn't accept ugliness as the norm. We should demand better from ourselves and from one another."

Following the speech, he answered questions and reaffirmed his commitment to bring criminal justice reform legislation to the House floor. He mentioned the detrimental effects of "mandatory minimums" and "three strikes" laws and the need for redemption.

Here are some related bills:

These women pilots were some of the first to ferry B-17 "Flying Fortress" bombers.
More than 1,000 WASP provided essential military air support in the United States during World War II.
Photo: Air Force, Caption: Military Times

As WWII drew to a close, the Army disbanded the program so men could return to flight training positions. Women were denied veterans benefits and services until 1977 when Congress passed retroactive legislation. In 2002, WASPs became eligible for inurnment in Arlington National Cemetery, but in 2015, eligibility was revoked, with Army officials saying the women were civilians at time of service.

There is similar legislation in the Senate, but no timeline for a possible vote. Last week during a Senate Armed Services hearing on the Department of Defense budget, Sen. Joni Ernst [R, IA] pressed Defense Secretary Ash Carter on the need to restore WASP inurnment eligibility.

Acting Army Secretary Patrick Murphy called on Congress to reverse the 2015 decision, saying the fastest way to fix this is an act of Congress.

The House approved a bill that requires states to adopt a centralized electronic system to expedite the placement of children in foster care or guardianship, or for adoption, across state lines. The bill incentivizes states to implement the National Electronic Interstate Compact Enterprise (NEICE). It also provides grant money to develop such systems.

The Senate companion bill (S. 2574) was introduced in February and waits to be considered by a congressional committee.

House passed bill that would change how the Department of Justice and Federal Trade Commission implement antitrust laws.

The bill, known as the SMARTER Act, eliminates the differences in the FTC and DOJ review processes when examining mergers and acquisitions. The bill passed in largely party-line 235-171 vote, with 5 Democrats voting in support of the bill.

The Obama Administration issued a Statement of Administration Policy in opposition of the bill, saying the bill would eliminate important administrative and procedural tools of the Federal Trade Commission to "challenge anticompetitive mergers and protect consumers."

The Senate approved the bill last week, and the House passed the amended version this week by voice vote. Now it's off to President Obama's desk.

Speaker Paul Ryan's March 31 deadline to address Puerto Rico's debt crisis is fast approaching. Natural Resources Chairman Rob Bishop [R, UT-1] is spearheading a bill that would establish a federal board to oversee Puerto Rico's deficit-cutting, as well as considering granting the board the ability to restructure Puerto Rico's debt. According to Speaker Ryan, the committee is on track to take up the bill, with a hearing and markup scheduled following Easter recess.

This week Puerto Rico turned to a seven-member Supreme Court, looking for legal rights to restructure what it owes to creditors. Justice Samuel Alito recused himself due to financial conflicts, altering the dynamics of the Court.

Tell us about your state and what you want to see out of POPVOX/States!


"The Labor Supply of Undocumented Immigrants"  by George J. Borjas, The National Bureau of Economic Research

"Who Gets Time for Federal Drug Offenses? Data Trends and Opportunities for Reform" from The Urban Institute