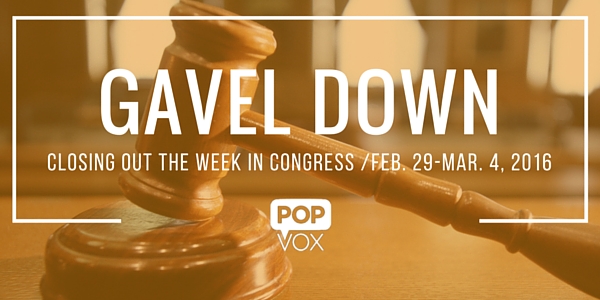 
Most active bill on POPVOX this week:
S. 524 COMPREHENSIVE ADDICTION AND RECOVERY ACT (CARA) OF 2016 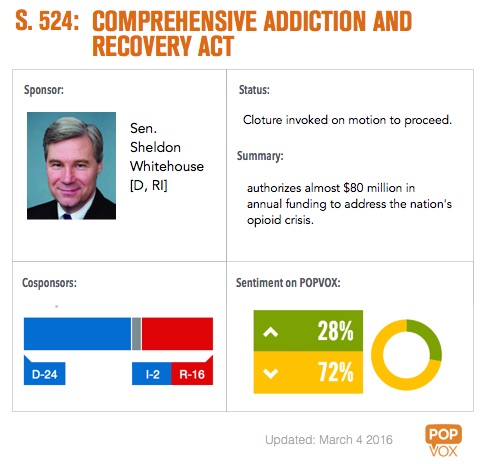 
On Monday, Senate voted 89-0 to invoke cloture on CARA, a bill that would authorize nearly $80 million in funding to address the opioid epidemic.

The Senate spent the week vollying amendments, with both Senate Majority Leader Mitch McConnell and Senate Minority Leader Harry Reid pushing for more amendments. The Senate considered several of the 90+ filed amendments, such as:

Towards the end of the week, Senate Minority Leader Harry Reid said Democrats needed more amendments or they'd move to block the bill, but later both Reid and bill sponsor Whitehouse said Democrats will not block the bill over amendments, specifically the failed Shaheen amendment that would have added $600 million to combat heroin and prescription drug abuse.

The bill includes provisions to:

So what's next?
Senate Majority Leader Mitch McConnell moved to end debate on CARA on Thursday evening. Senate will take a first procedural vote on Monday at 5:30 pm, with 60 votes needed to overcome the hurdle.

Bills on the Move

The battle continues over whether Apple can be compelled to assist the FBI in accessing the iPhone of the San Bernardino shooter. On Monday, Apple received a favorable ruling in a related case in ew York: a federal magistrate judge ruled that Apple could not be made to provide access to a phone at issue in a drug case. This was the first time a judge had ruled on the government's argument using the "All Writs Act" from 1789, in what Reuters called a "huge win for Apple."

On Tuesday, FBI Director James Comey testified before the Senate Judiciary Committee, saying that encryption is creating "warrant proof" devices. Both Apple and its critics emphasized that Congress should act on the question:

Should the FBI have the right to compel a company to produce a product it doesn't already make, to the FBI's exact specifications and for the FBI's use? … The decisions should be made by you and your colleagues as representatives of the people, rather than through a warrant request based on a 220-year-old statute." — Apple General Counsel Bruce Sewell in prepared testimony to Congress (NPR).

A new bill from Reps. Ted Lieu [D, CA-33]  and Blake Farenthold [R, TX-27] would preempt new state proposals (most recently in NY and CA) to ban smartphone encryption for phones sold in those states and fine manufacturers for each phone sold.

The proposed commission would have sixteen members, eight from each party, with one person representing each of these fields:

In addition, Senate Intelligence Committee Chairman Richard Burr [R, NC] and Ranking Member Dianne Feinstein [D, CA], are reported to be working on a bill that would compel companies to override encryption technology when presented with a warrant, an effort seen by many as an uphill climb.

The White House said it "strongly opposes" the bill because it would "extend indefinitely deadlines for the brick and structural clay industry to limit mercury and other hazardous air pollution."

Tell us about your state and what you want to see out of POPVOX/States!

"Patients' Perspectives on Health Care in the United States: A Look at Seven States & The Nation" by NPR, Robert Wood Johnson Foundation, and Harvard T.H. Chan School of Public Health