A staggering amount of policy made its way through the Capitol Hill maze  — impacting everyone and every sector of the economy. The $1.1 trillion Omnibus Spending bill and the $625 million Tax Extenders package passed early Friday morning. The House and Senate then adjourned, bringing the first session of the 114th Congress came to a close.

“gun”
Most active bill on POPVOX this week: 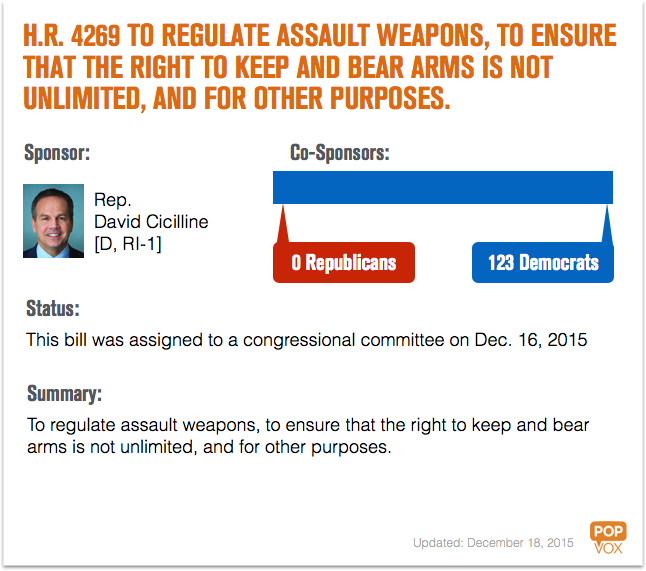 The $1.1 trillion package passed Friday morning. The “bus” carried bills with levels and conditions on spending for operations and programs across the federal government, including: many “policy riders”, the intelligence authorization bill, the Cybersecurity and Information Sharing bill (CISA), reauthorization of health benefits for 9/11 responders, repeal of the ban on crude oil exports, and much more.

How did your Representative vote?

How did your Senator vote?

This year’s “Tax Extenders” package, not only continued many of the deductions and credits that are usually renewed each year, it actually made some of them permanent, in addition to changes to some Treasury Department (and IRS) policies.

How did your Representative and Senator vote?

When the House and Senate gaveled down on Friday, they adjourned “sine die” (from the Latin “without day”), ending the first session of the 114th Congress. They will reconvene in January to begin the second session.

Bills currently pending in Congress will carry over into the next year; the 114th Congress closes at the end of 2016 (when we will have speculation about a potential post-election “Lame Duck” session.)

The Bipartisan Index by The Lugar Center and Georgetown University

An Environmental Policy Primer for the Next President by Diane Katz, The Heritage Foundation