It was a “to be continued” sort of week in Congress. Negotiations continue on an end-of-year Omnibus spending bill and tax extenders, while a short-term extension passed to give the “glacial” process more time. A trade enforcement bill passed the House, marking the third conference report in ten days, and several Members introduced bills to authorize military force against ISIS.

Surprising no one, Congress voted this week on a short-term extension to current spending authority to give time for ongoing negotiations on the BIG end-of-year bill, known as the “Omnibus”

According to reports, things are moving slowly: “glacier-like” and “snail’s pace” were how several Members described it.
A deal is expected Monday, with negotiators working over the weekend to bridge remaining impasses on controversial “policy riders.” While there is no public list of riders under consideration some rumored provisions include:

Given the Democratic opposition, the house may fall back to a bill introduced by Ways and Means Chairman, Kevin Brady, this week:

(As an amendment to the Senate amendment to H.R. 34): The Tax Increase Prevention and Real Estate Investment Act
Draft language | More from Forbes

On Friday, the House sent a third conference report to the Senate (following recent passage of the Highway and Education conference reports.) The Trade Facilitation and Trade Enforcement Act (H.R. 644)”would update trade policies at U.S. borders and authorize the U.S. Customs and Border Protection.”

Speaker Paul D. Ryan noted the milestone in his weekly press briefing as a return to “regular order”:

“So we are getting real, concrete results. And we’re getting the House of Representatives back to functioning as the people’s House.”

Authorization for Use of Military Force (AUMF)

Several versions of authorization exist but none have been approved. President Obama urged Congress “to vote to authorize the continued use of military force against these terrorists” in his Sunday address to the nation. This week Rep. Scott Rigell [R, VA-2] and Rep. Peter Welch [D, VT-0] introduced companion legislation to a proposal by Sen. Tim Kaine [D, VA] and Sen. Jeff Flake [R, AZ] to authorize war against the Islamic State.

The New York Times published an interactive tool to compare the various authorization plans. For example, the Graham bill authorizes “all necessary and appropriate force,” with no restrictions on ground troops, whereas the president’s draft expressly does not authorize use of forces in “enduring offensive ground combat operations.” The drafts by the president, Senate Foreign Relations Committee, and Kaine-Flake all limit authorization to three years — the Graham bill has no time limits.

International negotiators continue to hash out major climate pact, working past original deadline. Text for the new climate change accord was released but there’s still one major hole to address — how to monitor follow through on promises to cut emissions growth.

Will the new agreement make a difference?

Mixed reviews — Mother Jones explains why 1.5 degrees matters. Morning Consult finds that 27% of voters think countries will not follow through on promises made in agreement. 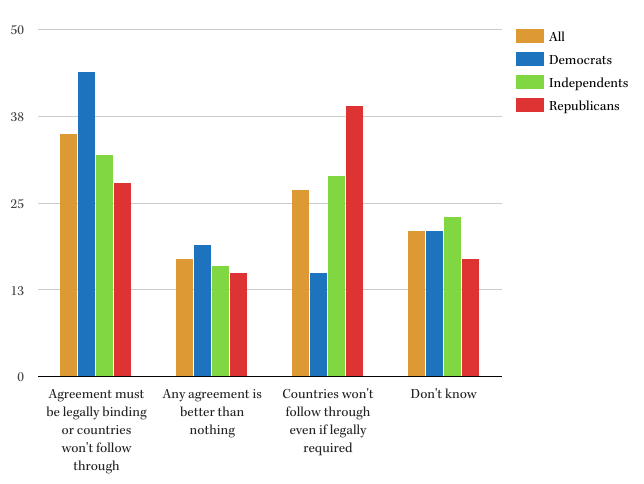 Several notable hearings occurred on the Hill this week, including but not limited to:

Senate Special Committee on Aging: Senate’s first hearing on drug pricing this year — examined sudden huge increases in prices of older drugs, such as Turing Pharmaceuticals’ overnight increase to $750 a pill from $13.50. Sen. Claire McCaskill [D, MO]: “My biggest challenge today is not to lose my temper. The facts underlying this hearing are so egregious…”

Senate Subcommittee on Space, Science and Competitiveness: Sen. Ted Cruz [R, TX] held a nearly three-hour hearing to question “the objectivity of climate research.” The main focus of the hearing was examining satellite records that showed global temperatures have barely budged since 1998. Many Democrats refuted this evidence, saying it involved isolated data points taken out of context.

House Financial Services: Reauthorized its task force to study how money flows to militants and supports acts of violence. Chairman Rep. Jeb Hensarling [R, TX-5] said the committee is in “fact-finding mode” to determine financial links to terrorism. Legislation on terrorism financing is expected in the first months of 2016.

Senate Armed Services: Defense Secretary Ash Carter requested funds for the “Syria equipping program” during hearing on U.S. Strategy to counter ISIL and U.S. policy toward Iraq and Syria. Panel chair Rep. John McCain [R, AZ-0] said “We don’t want to approve of something like that again” — referencing previous funding that produced only a handful of fighters, falling short of intended goal of 5,000+ fighters.