Where the Rayburn Am I? 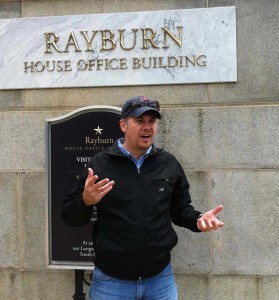 The most popular POPVOX blog posts that people (read: Congressional staffers) seem to keep coming back to are those in the Hill 101 category. Whether it’s an explanation of why revenue measures must originate in the House or  what the heck the bells and buzzers mean on the Capitol Hill clocks, let’s face it, it’s sometimes tough to find a simple explanation of the things that make Capitol Hill so mysterious.

When I was a staffer I had a recurring, terrible nightmare that I was lost in the sub-basement of the Rayburn building and whether I took escalators up or down, they just led to more, eternal sub-basement.

The Rayburn House Office building, finished in 1865, is the third and most modern House office building. The others are Longworth and Cannon.

Named after former House Speaker Sam Rayburn, the building has found its way into the news over the years.

Sometime's it's the Members-only House gym (which famously stayed open during the 2013 government shutdown, while the staffer gym was closed.) Proximity to the gym makes it the building of choice for those Members who sleep in their offices. Rayburn is also the only House office building with a train to the Capitol (which, compared to the sleek Senate version, looks like the kiddie rides at Disneyland.)

For Congressional staffers, lobbyists, and some unlucky tourists, however, the Rayburn maze is like the Bermuda Triangle of Capitol Hill. Colleagues head off for meetings, not to be heard from for hours. Rayburn has foiled meeting times, blown cell reception, and contributed to many a blister on a high-heeled heel.

Three factors contribute to the madness of Rayburn:

1) The Square: Rayburn is built like an "H" with a square in the middle. On a first round of Rayburn with a Hill vet, the Square lulls you into false confidence. You keep walking for what seems like ages, room numbers go in a sequence that makes sense, and you can make it back around to where you started.

2) The WIngs: But, aha! The next time you try that same route, odds are that you will not be in the square, you will be in one of the wings. While will feel like you should be able to walk around and eventually get to where you need to be… BAM. you have reached a dead end. Rayburn has four painful dead ends.

3) The Floors (and the room numbers): Rayburn has a sub-basement (where the subway is.) But, Capitol room numbers have a language unto themselvesl

ROOM NUMBERS: They are actually set up to help you know which building you need, but only if you know the code:

SENATE SIDE (slightly easier) – indicated by "S" and a letter indicating the building, and room number.  So, SD-101 is Room 101 in the Dirksen Building (DSOB) . "SH-" indicates the Hart Building (HSOB) and "SR-" is for Russell (RSOB) .

CAPITOL BUILDING – Rooms start with "H" or "S" to indicate whether they are on the House or Senate-side of the Capitol.  Single digits (H1, H2, H3) are in the basement; three-digit numbers indicate floor; so H-101 is on the first floor; H-201 is on the second.