What Happens on the First Day of the New Congress? (updated)

The 20th Amendment to the Constitution mandates that Congress meet every year on January 3 (unless the dates is changed by statute.)

The first day of a new Congress follows a well-established schedule, from oaths of office to leadership elections and rule changes. Here is an overview of what is in store for the first day of the 115th Congress, as described by the nonpartisan Congressional Research Service in reports for the House and Senate.

—>> FOR THE HIGHLIGHTS, CHECK OUT "10 Things to Know About the First Day of Congress" 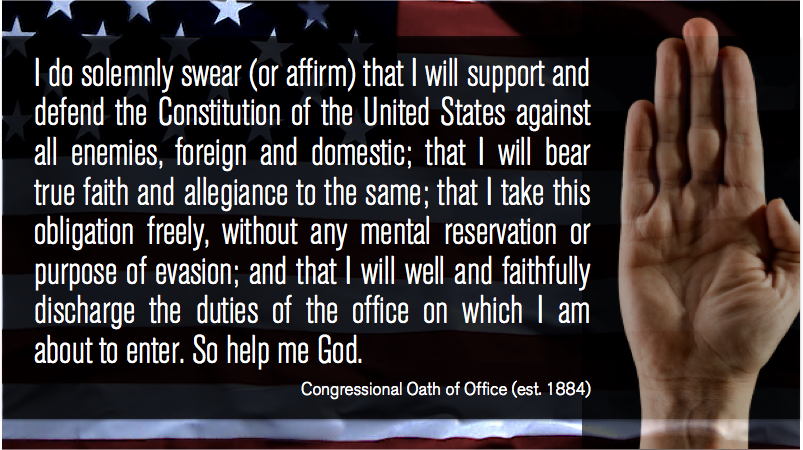 Both the House and Senate begin with a call to order, prayer led by the chambers' chaplains, and the Pledge of Allegiance. The Senate is called to order by the Vice President, who is also the President of the Senate.

The House is called to order by the Clerk of the previous Congress, who asks for a roll call to determine whether a Constitutionally-required quorum (simple majority) is present. Members-elect of the House register their presence with electronic voting cards.

Article I, Section 2 of the U.S. Constitution states, "The House of Representatives shall chuse their Speaker and other Officers." The Speaker is second in the line of succession to the Presidency, after the Vice President.

Once voting ends, the Speaker-elect is escorted to the dais by a bipartisan group of representatives and sworn in by the Dean of the House, its most senior member: Rep. John Conyers (D, MI-13) has served in the US Congress since January 3, 1965.

The Oath of Office

Members of both chambers of Congress take the same oath of office, administered in the House by the Speaker of the House and in the Senate by the Vice President.

I do solemnly swear (or affirm) that I will support and defend the Constitution of the United States against all enemies, foreign and domestic; that I will bear true faith and allegiance to the same; that I take this obligation freely, without any mental reservation or purpose of evasion; and that I will well and faithfully discharge the duties of the office on which I am about to enter. So help me God.

While an oath of some kind has been administered since the first Congress in 1789, there have been several changes, most notably a "Test Oath" put in place during the Civil War, which was later removed. The current version of the oath of office dates back to 1884.

For both the House and Senate, many members choose to hold a family Bible or another item in their left hand while raising their right hand to take the oath. "There is no requirement that a Bible or anything else be used when the oath is taken." (CRS, 3)

Alerting the President that Congress is "Ready to Do Business"

When oaths of office have been administered and a quorum is present, the leaders of each chamber offer resolutions to inform the other chamber and the President that they are assembled and ready to proceed to business. House and Senate leaders also call the President "with the news that a quorum of each house of Congress has assembled and is prepared to begin its work." (CRS, 3)

The Senate is a "continuing body" because its members serve staggered six-year terms, which means that two-thirds of the Senate are serving at any time. Senate officers do not need to be re-appointed or rules re-established with each new Congress, though changes usually occur when there is a vacancy or the majority changes hands.

Both parties present slates of candidates for Clerk, Sergeant at Arms, Chief Administrative Officer, and Chaplain. The majority party's candidates prevail, given the numerical advantage.

Unlike the Senate, the House must pass new rules at the beginning of each Congress, usually by adopting the rules of the previous Congress, with amendments.

"The majority’s proposed rules are offered in the form of a House simple resolution, most often numbered H.Res. 5." (CRS, 10).

Getting Down to Business

With members sworn in, leaders elected, and rules established, the 115th Congress can proceed to legislative business. Legislators will begin to introduce bills, which will be assigned a chronological number, referred to appropriate committees, and the Legislative wheels will begin to turn.

Some Members of Congress are methodical about bill reintroduction. For example, Representative Rob Woodall [R, GA] waits every session to introduce his "Fair Tax Act" in a way that guarantees him the same bill number – H.R. 25.

As bills are introduced, they will be added to POPVOX, where you can follow their progress through the legislative cycle, share your opinion with your elected representatives, and join with like-minded people to build support for your position.

Editor Follow
« 10 Things to Know about the First Day of the New Congress (updated)
The Hill 101: What is the Congressional Review Act? »

Not all bills get reintroduced. Some bills that were sponsored by Members who are not returning are essentially orphans, waiting for someone to take...