Avoiding a Government Shutdown… and More

It’s that time of year again… when Congress looks to pass spending legislation to avoid a federal government shutdown by Friday. During the last budget negotiations in late September, a Republican proposal defunding Planned Parenthood threatened to trigger a shutdown, which was averted by a temporary measure keeping the government funded until December 11. Now, Members of Congress are proposing to include carbon and water deregulation measures as well as limiting Syrian refugees as part of the spending bill.

In addition to the omnibus spending bill, the House will work on changing the Visa Waiver Program, in light of the Paris attacks, as well as banning microbeads. The Senate will continue a bipartisan effort to replace No Child Left Behind, before sending it to the President for his signature. And, House Speaker Paul Ryan is calling for comprehensive mental health legislation to address gun violence, while other Members of Congress are proposing an end to the ban on federal gun violence research. 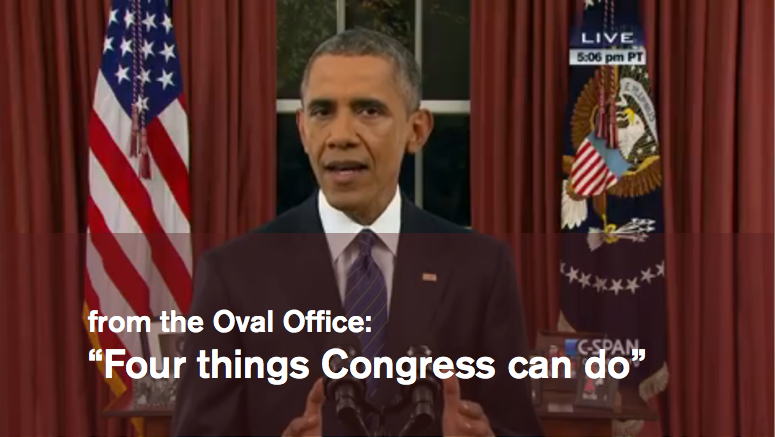 Last night, President Obama addressed the nation. In the speech, he discussed the tragedy of San Bernardino, which he called “an act of terrorism designed to kill innocent people.” In addition, the President called on Congress to take four actions:
Several bills are pending in Congress to address each of these topics (and the House will vote this week on changes to the visa waiver program.) Find out more and tell Congress what you think about these issues.

The House will vote on legislation to amend the Visa Waiver Program, which allows for visa-free travel into the US for millions of people from 38 participating countries.

“Following the attacks in Paris last month, a bipartisan majority in the House swiftly urged the Obama administration to pause its Syrian refugee resettlement program. We also pledged to examine other potential vulnerabilities that foreign terrorists could exploit to enter the country. To that end, next week the House will consider thoughtful legislation offered by Rep. Candice Miller to ratchet up security guidelines within the Visa Waiver Program.

Would “help the Department of Homeland Security identify and stop terrorists with Western passports from entering the United States,” according to the bill sponsor.

The tragic mass shootings in Colorado, South Carolina and California have prompted Members of Congress to discuss the causes of gun violence and ways to reduce it. House Speaker Paul Ryan called on Congress to work on mental health legislation early next year, noting a bill introduced by Congressman Tim Murphy (R-PA) to address the issue:

“Fixes the nation’s broken mental health system by focusing programs and resources on psychiatric care for patients & families most in need of services,” according to the bill sponsor. (Read summary here)

On the same day as the San Bernardino shooting, a group of doctors lobbied lawmakers in Washington, DC to end the ban on allowing the Centers for Disease Control and Prevention (CDC) and the National Institutes of Health (NIH) to conduct research on gun violence.

In 1996, Congress added an amendment, known as the Dickey Amendment, to an appropriations bill that blocked the CDC from researching gun violence and discontinuing funding for that research. Last week, the amendment’s author, Congressman Jay Dickey [R-AR], reversed his position in a letter to the House Gun Violence Prevention Task Force:

“Research could have been continued on gun violence without infringing on the rights of gun owners, in the same fashion that the highway industry continued its research without eliminating the automobile… it is my position that somehow or someway we should slowly but methodically fund such research until a solution is reached.  Doing nothing is no longer an acceptable solution.”

In October, more than 100 members of the House sent a letter to leadership to end the ban on federal funding for gun violence research. “As a result of this ban, there has been very limited academic research into the causes of gun violence and its impact on public health, weakening efforts to make our communities safer and to implement bipartisan gun reforms,” explained the letter.

In addition, several bills have been introduced to promote research on gun violence:

Would set aside $10 million in funding each year for FY2016-2021 at the Centers for Disease Control and Prevention (CDC) to conduct or support research on firearms safety or gun violence prevention, according to the bill sponsors.

“Would Give the CDC the authority to research the causes, mechanisms, prevention, diagnosis, and treatment of injuries with respect to gun violence; encourage the improvement and expansion of National Violent Death Reporting System; and empower health care providers by not inhibiting a physician or other health care provider from asking a patient about the possession of a firearm, speaking to a patient about gun safety, or reporting to authorities a patient’s threat of violence,” according to the bill sponsor.

This week, the House will vote on banning microbeads. According to the House Energy and Commerce Committee:

“Microbeads are those tiny little scrubbers in your soap, cleansers, and even toothpaste. On their own, they are nearly invisible, smaller than a pinhead. But once they’ve flushed down the drain is when the problems begin…. They are known to absorb pollutants, and are often mistaken as food by fish and wildlife. Simply put, microbeads are causing mega-problems.”

Conference on Customs and Trade Enforcement

Last week, the House agreed to go to conference with the Senate to negotiate the two chambers’ versions of the Trade Facilitation and Trade Enforcement Act, also known as Customs Reauthorization. The House and Senate each passed different versions of the bill this summer.

A House-Senate agreement would send the bill to the President—authorizing the Customs and Border Protection agency for the first time since it was created in the aftermath of the September 2001 attacks.

“Provides direction on how to streamline trade, improve enforcement, and measure progress within Customs and Border Protection (CBP) in order to move the ever-increasing volume of legitimate trade more efficiently and halt trade that doesn’t comply with US laws,” according to the House Ways and Means Committee. The bill focuses on three critical aspects of CBP’s mission, as well as enhancing transparency and accountability: facilitating and streamlining the flow of legitimate trade; modernization of CBP’s automated systems; and enforcement of US trade laws.

Education Reform in the Senate

Last week, the House passed a House-Senate conference agreement that would replace No Child Left Behind. The agreement now goes to the Senate for its approval. It represents a compromise between the House-passed Student Success Act (H.R. 5) and the Senate-passed Every Child Achieves Act (S. 1177):

S. 1177: Conference Agreement on the Elementary and Secondary Education Act — the Every Student Succeeds Act (ESSA)

The House will also vote on the following bills:

“Requires the Secretary of Homeland Security to submit a study on the circumstances which may impact the effectiveness and availability of first responders before, during, or after a terrorist threat or event,” according to the House Homeland Security Committee.

“Would reauthorize the Federal Law Enforcement Training Center (FLETC) located in Brunswick, Georgia. Since its creation in the 1970’s, FLETC has provided high-quality, cost-effective, standardized training for federal law enforcement training officers from multiple agencies,” according to the bill sponsor.

“Will give state and local governments access to federal resources when it comes to securing their digital information systems,” according to the bill sponsor. “directs the National Cybersecurity and Communications Integration Center (NCCIC) at the Department of Homeland Security (DHS) to coordinate with state and local governments on securing their information systems on a voluntary basis. The NCCIC can assist in identifying system vulnerabilities and possible solutions. They can also provide technical, implementation and privacy training for cybersecurity analysts. In addition, the NCCIC will be required to seek feedback from state and local governments in order to report on the effectiveness of their efforts.”  Source

(Congressman Hurd organized cyber offensive campaigns while working as an undercover officer in the CIA.)

Establishes a Chemical, Biological, Radiological, Nuclear, and Explosives Office (CBRNE) within the Department of Homeland Security.

Would “make the STB more accountable and effective in addressing rail rate and service disputes,” according to the bill sponsor. http://www.thune.senate.gov/public/index.cfm/2015/6/senate-passes-bipartisan-surface-transportation-board-reforms
·       “Improves the STB’s current dispute resolution process by setting timelines for rate reviews and expanding voluntary arbitration procedures to address both rate and service disputes;
·       “Ensures the STB has the authority to proactively resolve problems before they escalate into larger disputes by providing the STB with the ability to initiate investigations on matters other than rate cases; and
“Improves the STB’s structure anddecision making processes by expanding the board membership from three to five and, with proper disclosure, allowing board members to talk with one another.”
— Passed by the Senate on 6/8/2015; now goes to the House for consideration. —

— BIPARTISAN —
Sponsor: Rep. Darrell Issa [R, CA-49]
“Would waive passport fees for certain first responders who travel to foreign countries to aid in disaster response,” according to the bill sponsor.

“would increase public oversight over foreign aid by requiring federal agencies to show both where taxpayer money is spent around the world and how effective that aid is,” according to the bill sponsor. “First, it would require the President to establish guidelines on measurable goals, performance metrics, and monitoring and evaluation plans for all foreign aid programs. Second, it would increase aid transparency by codifying what is currently being done through the Foreign Assistance Dashboard and increasing the amount of information required to be posted online, including actual expenditures and evaluations.” Source

“To encourage the development of health products that are affordable, culturally appropriate, and easy to use in low-resource health systems. This bill will require the US Agency for International Development (USAID) to submit a report on the development and use of global health innovations at the Agency,” according to the bill sponsor.

Would extend from 45 days to 60 days the annual notice period for the announcement of payment rates under Medicare Advantage (MA). MA organizations shall have at least 30 days to comment on proposed changes.

Makes technical corrections to the Homeland Security Act (HSA) of 2002.

“Would improve existing programs, requirements and procedures across federal agencies established to identify and prevent improper payments,” according to the bill sponsor.  “Improper payments continue to cost agencies billions of taxpayer dollars, and ultimately undermine the effectiveness of the services that Americans rely upon. This legislation builds on past bipartisan efforts to implement stronger program integrity measures across the federal government and provide agency officials with the tools they need to identify and prevent improper payments.”
—Passed by the Senate on 7/28/2015; now goes to the House for consideration.—

“Requires the BLM to commission a survey along the 116-mile stretch of the Red River using the gradient boundary survey method developed and backed by the Supreme Court to determine the proper ownership boundary between public and private land,” according to the bill sponsor.

Rachna Choudhry Follow
« What’s an “Omnibus” bill?
Should Congress authorize the use of force against ISIS? »