Veterans Day falls on November 11, the anniversary of the end of World War I. 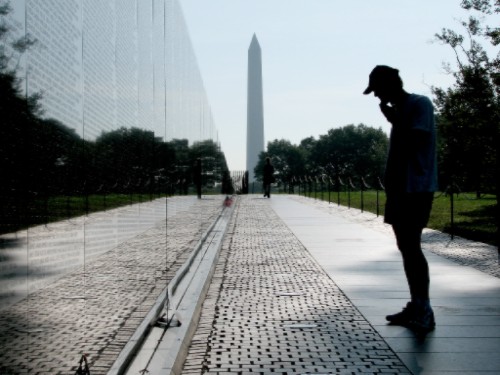 Last week, Senator Johnny Isakson [R-GA], Chairman of the Senate Committee on Veterans’ Affairs, highlighted the committee’s work on behalf of veterans in the 114th Congress ahead of Veterans Day, including the Clay Hunt Suicide Prevention for American Veterans Act, improvements to the Veterans Choice Program and the Veterans Identification Card Act.

This Veterans Day, here’s a look at a few issues that lawmakers are working on:

In May 2015, Corinthian Colleges, Inc., a for-profit parent company of 28 schools closed its doors and filed for bankruptcy. As a result, thousands of students — many of them veterans who used their GI Bill benefits to enroll — were left with no options of transferring credits to traditional schools.

The Secretary of Education, Arne Duncan, has called on Congress to strengthen accountability of for-profit schools:

“Some of these schools have brought the ethics of payday lending into higher education… They prey on the most vulnerable students, and leave them with debt that they too often can’t repay.”

Thirty percent of veterans using the post-9/11 GI Bill attend for-profit schools — compared to only 8% of students nationally, according to a Los Angeles Times analysis of government data. Some lawmakers are have asserted for-profits schools have recruited veterans in order to comply with the “90/10 rule.” The rule requires for-profit schools to derive at least 10% of revenue from non-federal sources, so not to rely solely on federal financial aid. Because GI Bill benefits aren’t counted as a federal source, veteran enrollment has prevented some schools from violating the rule.

About a quarter of the money spent under the new GI Bill has gone to for-profit colleges, According to the Senate Health, Education, Labor & Pension Committee. “For-profit colleges received $1.7 billion in Post-9/11 G.I. Bill benefits in the 2012-2013 school year, nearly as much as the total cost of the program just four years earlier.”

“Would close a loophole that allows for-profit schools to avoid having to secure at least 10 percent of their revenue from non-federal sources.”

From our Hill Sources: Under current law, for-profit schools must follow the “90-10 rule” which requires them to obtain at least 10 percent of their revenues from sources other than taxpayers. However, current law leaves open a loophole that allows for-profit institutions to count military and veteran educational assistance, including tuition assistance and Post-9/11 GI Bill benefits, as non-federal revenues.

The Servicemen’s Readjustment Act of 1944—commonly known as the GI Bill of Rights—with key provisions that offered veterans education and training, loan guaranty for homes, farms or businesses, and unemployment pay. In 1947, veterans accounted for 49 percent of college admissions as a result of the GI Bill.

In 2008, the GI Bill was updated again to address the needs of veterans with active duty service on, or after, Sept.11 2001. Today, nearly 550 service members transition from military to civilian life each day. One-half of eligible veterans use their GI Bill benefit to pursue higher education or a specialized training program or apprenticeship.

This year, lawmakers have introduced several proposals to expand the post-9/11 GI Bill and make it more accountable:

“Establishes a 3-year pilot program that would enable up to 250 GI Bill benefit-eligible veterans who apply to the program to start a new business or purchase an existing business or franchise,” according to the sponsor.

“The VET Act proposes an innovative way to support veterans in their professional development by offering veterans a choice in accessing the resources, training and support they need to pursue the American dream to start a small business, create jobs, and generate growth in our economy.”

“Would close a loophole that allows for-profit schools to avoid having to secure at least 10 percent of their revenue from non-federal sources.”

From our Hill Sources: Under current law, for-profit schools must follow the “90-10 rule” which requires them to obtain at least 10 percent of their revenues from sources other than taxpayers. However, current law leaves open a loophole that allows for-profit institutions to count military and veteran educational assistance, including tuition assistance and Post-9/11 GI Bill benefits, as non-federal revenues.

“Would provide additional authority to the Veterans Affairs Secretary to grant funds to post 9/11 veterans seeking to obtain a degree in Science, Technology, Engineering and Mathematics (STEM) fields,” according to the sponsor.

“Would cap flight training fees paid for by the GI Bill at $20,235 a year,” according to the sponsor. “Some flight schools discovered there was no limit to what they could charge veteran students taking flight school courses. Unfortunately, as a result, some private contractors have exploited this loophole to leverage uncapped fees to charge upwards of $500,000 per student.”

This week, the Senate will consider a substitute amendment to HR 2029 that adjusts funding to comport with the two-year Balanced Budget Act of 2015:

“Recommends a total of $79.7 billion in discretionary funding, a more than $2.1 billion increase over the committee-reported bill. This amount is $7.9 billion above the FY2015 funding level and $1.0 billion over the President’s FY 2016 budget request,”according to the Senate Appropriations Committee.

“The substitute recommends $8.2 billion for military construction and $71.2 billion in discretionary funding for veterans programs, a $1.9 billion over the committee’s mark for the Department of Veterans Affairs. The increase of $1.9 billion is for VA Medical Services, increasing the total to $50.7 billion for the treatment and care for approximately 6.9 million veterans in FY2016. The substitute would provide a total of $101 million for the Arlington National Cemetery, a $30 million increase over the committee-approved bill.”

Please keep in mind that highlighting a bill doesn’t imply a POPVOX endorsement in any way. Rather, we’re simply trying to offer one more way to stay informed of a complex legislative system.