[UPDATED] Q & A: What’s next for the health care bill?

This morning the Senate released the discussion draft of its changes to the House-passed American Health Care Act.

Supporters of the bill hope to have the Senate bill passed before July 4th, and passed by both chambers before the August Congressional recess. 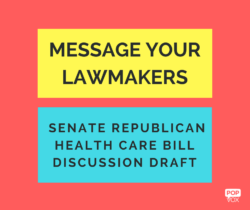 Senators plan to write their own health bill, so keep an eye on Senators Orrin Hatch [R, UT] and Lamar Alexander [R, TN], chairmen of the relevant committees.

The health bill is a reconciliation bill, (crafted in response to the recent budget to "reconcile" existing policies with the budget), which means it only needs a simple majority and is not subject to filibuster. A reconciliation bill is also subject to the "Bryd Rule," meaning it must reduce spending and cannot include "extraneous matters."

Once senator leaders come up with a bill that can pass Byrd Rule muster, it can come up for a vote before the full Senate. And if the Senate bill passes, that's when things get really interesting. The House and Senate would have to work reconcile differences and then the combined bill would have to pass both the House and Senate in the exact same form.

All of that to say, a long process awaits, with many twists and turns and opportunities to weigh in along the way.

Ask us anything and see your questions answered.

Sign up for the POPVOX daily "What's Up Washington"

What Congress is hearing from Constituents

Q & A: What health and retirement benefits do…

Q & A: How much do Members of Congress…

Q & A: Can the President dissolve an appeals…