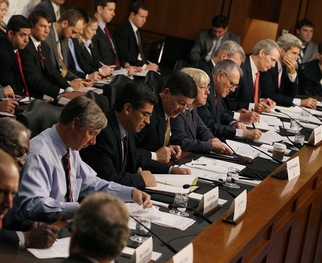 If you have paid attention to the “bill status” tab on POPVOX bills pages, you know that many have the same not-very-encouraging status:

This bill or resolution was assigned to a congressional committee on [x date] which will consider it before possibly sending it on to the House or Senate as a whole. The majority of bills never make it past this point.

In the House, most rank-and-file Members of Congress have very little to say about whether a bill moves past this point. They can wait for the committee to take it up or hope that it catches the attention of House Leadership (which is rare for a bill introduced by a member of the minority party.)

Busting out of Committee

There actually IS one way that a bill can be brought for a vote even if it does not get reported out of committee and is not selected by Leadership: a discharge petition.

If at least half of the Members of the House (218) sign onto the petition to discharge a bill, it is brought to the Floor for a vote.

For the first time since 2002, a discharge petition has reached 218 signatures and the House will on reauthorizing the Export-Import Bank.

H.R. 450: Providing for the consideration of the bill (H.R. 597) to reauthorize the export-import bank of the United States
Sponsor: Rep. Stephen Fincher (R, TN)

More from the Wall Street Journal.

Editor Follow
« Closing Out the Week in Congress — 10.09.15
Mental Health Bills in Congress »

Be Informed, Not Intimidated